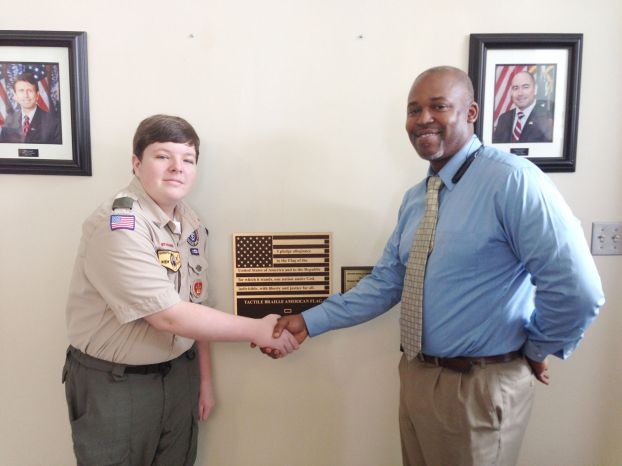 RESERVE — The roar was deafening when William Martin pulled into the Southeast Louisiana War Veterans Home.

Traveling with nine Harley-Davidson motorcycles has a way of doing that.

“Oh my goodness,” Home Administrator Cleveland Obey said. “It sounded like a jet sitting out in my parking lot when they all pulled up.”

Martin’s loud arrival reverberated through each nearby person’s sense of hearing, which seemed fitting because his goal was to honor those suffering with the loss of another sense — their sight.

Martin, a sophomore at Catholic High School in Baton Rouge, chose to place a permanent, bronze American Braille flag at the War Veterans Home in Jackson as part of a community service project while pursuing the rank of Eagle Scout.

Martin sold wristbands with the name of his project, “Touch and See,” and gave history and flag etiquette presentations to various organizations and civic groups in the Baton Rouge area in exchange for donations.

“After a few presentations, we noticed that we might be able to raise enough (money) for all five War Veterans Homes (in Louisiana,)” Martin said. “Thanks to many great people and two very generous donations, I was able to achieve this goal.”

According to the American Legion, official bronze American Braille flags feature the Pledge of Allegiance in Braille, as well as print, along with raised stars and stripes to give non-sighted individuals a sense and feel of the American flag’s beauty.

The Braille color code is located at the bottom of the flag.

Martin said the response in Reserve was great, with Obey adding more than 40 veterans lined the hallway during the presentation.

“It was in particular very special because whenever I entered, many of the veterans were lined up waiting for my arrival,” Martin said. “The bikers and I greeted them and talked to them while the flag was being installed. Mr. Obey was also very nice and made the process go very smoothly.”

Obey said since the flag’s installation last month, he sees veterans coming up to take a look at the Braille flag each morning in the front lobby. It’s mounted low enough to provide wheelchair accessibility for those who would like to experience it.

“We have a few veterans that have visual impairments that benefit from the actual Braille flag,” Obey said.

Martin was especially thankful for the support of the Baton Rouge Harley-Davidson Owner’s Group (H.O.G.), which escorted his mother and him to Reserve.

“It was very cool,” he said. “It was the first time that I had been in any kind of escort, and it was a fantastic experience. The sound of the motorcycles was very powerful. It made me feel very special, and I’m grateful to the H.O.G. members for taking their time to escort me.”

A friend of Martin’s mom was the first to tell him about the Braille American flag, and it was his follow-up research indicating a need for a service project that inspired him to take on the unique effort.

According to his research and the World Health Organization, about 11.4 million people are blind or visually impaired in America, and the Department of Veterans Affairs estimates by 2020, more than 1 million veterans will be blind.