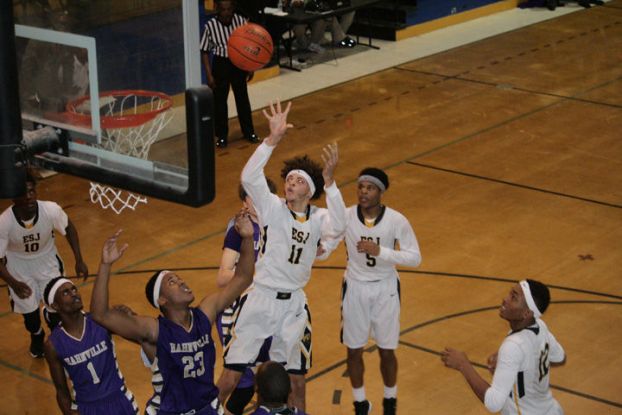 RESERVE — East St. John’s Troy Green was pleased after his team’s 77-60 District 7-5A victory over visiting Hahnville Friday night, but he was also hardly satisfied.

“We allowed 60 points )Friday), and we don’t like to give up more than 40,” the senior forward said. “Our goal coming into district was to beat everyone by 20 or more. So we’ve still got some things to work on.”

Lofty as those goals sound, so far Green and the Wildcats (15-6, 4-0) have been hovering around those marks. The win over Hahnville was ESJ’s fourth victory in four district games, the wins coming by margins of 37, 19, 20 and 17. ESJ allowed 48, 48 and 39 points in the three previous district wins.

“We never allow ourselves to just sit down and be satisfied with what we’ve done,” said ESJ coach Yussef Jasmine, who has led the Wildcats to district championships in six of his eight seasons, including in each of the past four seasons. “We continually try to reach even higher.”

The Wildcats reached high Friday against a Hahnville (10-9, 3-1) team that had won its first three district games.

A big lift came from sharpshooting guard Kendall Jackson, who scored 17 for ESJ in his fourth game back with the team after missing pre-district play.

“He’s got great range,” Jasmine said. “He can really shoot the ball. Adding him into the mix, it’s helping make us a very hard team to prepare for.”

Bradley’s slashing to the goal and Aucoin’s outside shooting kept the Tigers close early on. A Jackson 3-pointer early in the second quarter gave East St. John a 16-12 lead, though, and the Wildcats began to get rolling. Another 3, this time from Tre’Von Jasmine, made it 21-14. The lead grew to eight on a pair of Marcel Kelly free throws.

ESJ began to pull away in the third quarter. Another Jasmine 3 made it 42-27, then another pushed the lead to 45-29. A deep 3 from Jackson made it a 19-point advantage, then he canned another one from the corner for a 53-33 ESJ lead. Hahnville only got as close as 13 from there.

“We talked in the locker room at halftime,” said Green, who attacked the basket relentlessly in the second half, earning repeated trips to the free throw line. “We knew we needed to play with more intensity. I had two fouls in the second quarter, and coach told me to set that intense tone, to pick it up on defense and get my teammates involved.”

“We need that interior presence,” Yussef Jasmine said.  “I got on him. He needs to look to score more. We know he can do it.”

It was the fourth straight win for East St. John.

The loss snapped a five-game winning streak for Hahnville.

By RYAN ARENA L’Observateur RESERVE — The East St. John boys soccer team got off to a quick start at... read more