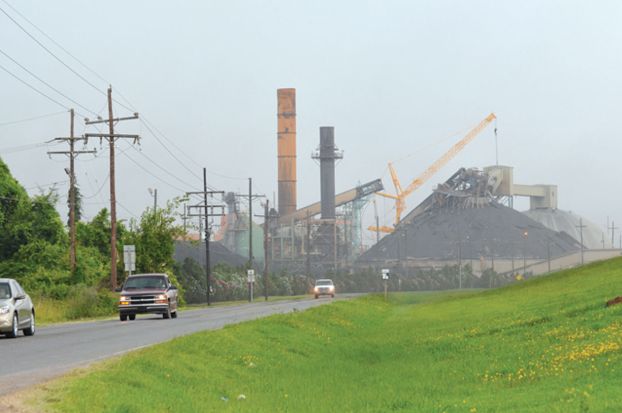 CONVENT — St. James Parish officials remember what it was like more than two years ago when volunteer fire departments from St. James and St. John the Baptist Parishes responded to a blaze at the Rain CII Carbon plant in Gramercy.

“We found bad things,” Parish President Timmy Roussel said. “The plant workers didn’t have a team to fight the fire. They didn’t have enough water on site. They had two fire hydrants on that plant site, one of them was covered with that coat and the other one did not have water to it.”

The fire broke out around 7:40 p.m. June 6, 2012. The blaze, reported to have been caused by a lightning strike from severe storms that evening, burned through the wooden roof of a storage dome containing calcined petroleum coke.

“Our only other spot was to get water through the Mississippi River with the (Port of South Louisiana’s) help,” Roussel said. “We found out then, the connections were wrong. After 12 to 16 hours, we were finally able to start putting water on that fire.

The fire was eventually subdued and, thankfully, no injuries were reported.

After the blaze, District 2 Councilman Jason Amato, who also serves as Lutcher Volunteer Fire Chief, said parish leaders realized their industrial partners needed their own fire response plan that did not rely on volunteer fire departments.

Roussel said most of the parish’s industrial plants had fire protection built into their systems, but many were also, at least somewhat, dependent on some fire department backup.

This presents a two-fold problem, he said, as membership in volunteer fire departments parishwide is dwindling, and those residents who do volunteer are not trained to fight industrial fires.

St. James Parish administrators went about crafting an ordinance that outlined to industrial partners that relying on volunteer fire departments in St. James Parish for emergency response is not an option.

“For our volunteer firemen, we are no longer asking them to respond to a situation where they may not be trained or putting them at risk because of the nature of an industrial incident,” Amato said. “For our community residents who live near industry, they now know that each industrial partner has to have approved emergency response plans to ensure they can handle incidents at their site, minimizing the offsite impacts to our nearby residents.”

Amato, who works for Shell Geismar, said the parish feedback from industry has been respectful and understanding.

He wanted the parish’s industrial partners to understand the risk was present that one day they would call for volunteer fire departments to respond, and no one would be available.

“It really is the responsibility of our industrial partners to be self-sufficient and handle their own emergencies,” Amato said. “Many of our volunteer firemen do not have the industrial firefighting training to be able to enter a facility and react accordingly. For me, it became a personnel safety issue first.”