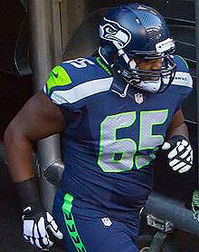 RESERVE — When River Region football fans turned on the Sunday Night Football game between the Seattle Seahawks and Arizona Cardinals, they saw a familiar sight.

Patrick Lewis, once again, was helping pave the way for a dominating rushing performance.

The former East St. John superstar offensive lineman is living his dream these days as an NFL player, having made a handful of starts this season for the defending Super Bowl champion Seattle Seahawks.

Usual Seattle starting center Max Unger has been sidelined for a number of games this season, and Lewis has been one of the players to find playing time in his absence. On Dec. 22, Lewis made a surprise start in Unger’s stead — Lemuel Jeanpierre had started the previous week and played well — and helped pave the way for a Seattle franchise record 596 yards in a 35-6 victory over Arizona that all but sealed up the NFC West division crown for the Seahawks. Seattle rushed for 267 yards in the win.

“It was just one of those nights,” Lewis said. “We started off and just held steady, then we made some adjustments. Everything just started clicking. We communicated well and played really well.”

When coaches informed him he would be starting, Lewis was ready.

“It meant I was just a step closer to living my dream of being an NFL starter,” Lewis said. “It’s what I’ve wanted since I was a little kid.”

Lewis is getting his first taste of playing time this year after spending his rookie season of 2013 with three different teams, Green Bay, Jacksonville and Cleveland.

Cleveland was where he found himself again early this season, after spending the latter part of the preseason with Seattle.

The Seahawks cut Lewis, the front office hoping to sign him to their practice squad, but Lewis quickly accepted an offer with Cleveland in order to cement a job for the 2014 season.

But Lewis made a good impression on Seattle coaches, and when the team suffered injuries to its interior line, Lewis got a call. Seattle could only sign him off Cleveland’s practice squad if it planned to promote him to the active roster, per NFL rules — luckily, that’s where the Hawks needed him.

“They signed me on a Wednesday and I was able to play on a Thursday, and I think that made an impression on them,” Lewis said, referring to an Aug. 26 game during the exhibition season against Oakland. “They liked that I was able to pick things up quickly and retain a lot of information in a short amount of time.”

He’s been under the tutelage of longtime NFL offensive line coach Tom Cable, who boasts a well-regarded zone-blocking scheme.

“(Cable)’s great,” Lewis said. “He’s held in high regard by the players for a reason. I’m learning a lot from him.”

Lewis is no stranger to strong offensive production. While at East St. John, he played multiple positions on the line for former ESJ coach Larry Dauterive, who has called Lewis “the best offensive lineman I’ve ever coached, bar none.” There, he made the Class 5A All-State team in three consecutive seasons.

He went on to play at Texas A&M, where he started first at offensive guard, and then at center, starting for an offense featuring Heisman Trophy winner Johnny Manziel and one that put up gaudy statistics on a weekly basis.

Lewis started two games against Arizona this season, and two others against Oakland and St. Louis, respectively. The Seahawks have won all four, three of those coming before the Seahawks renowned home crowd at Century Link Field, where Seattle has lost just twice in the past three seasons.

The Seahawks have a bye this week, but if Unger cannot return next weekend, Lewis would likely draw another start, this one in front of a raucous postseason crowd cheering on the NFC’s top-seeded Seahawks.

“Playing there, it’s amazing,” Lewis said. “By far, that’s the best crowd I’ve played in front of. You’ve got the 12th man going crazy  at all times. As far as I’m concerned, we’ve got the best fans in the league cheering us on.”

Patrick Lewis prepares to snap the ball for Texas A&M during a game against LSU. read more