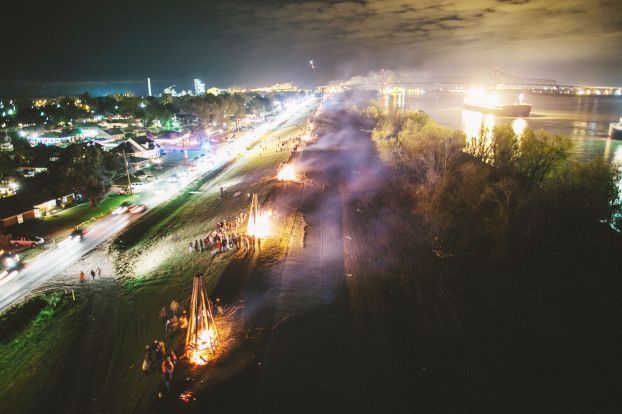 LUTCHER — Thousands of revelers flock to the levees of St. James Parish every year on Christmas Eve to take in the sights of the region’s bonfire tradition, and this year enthusiasts can enjoy the view all year long thanks to some amazing aerial photos captured that night by Brian Dryden.

Dryden, owner and operator of Ascend Aerial Media, said the 2014 season marked the fifth year he has attended the bonfire lightings.

With friends who live on River Road in Lutcher, Dryden said the bonfire tradition has become one his family has embraced.

“We love it,” Dryden said. “I’m a culturalist when it comes to South Louisiana and I love all of our traditions and festivals.”

Dryden said each year his family joins the crowd gathered in Lutcher to eat gumbo, watch fireworks and cozy up to the dancing flames of the fires.

This year, Dryden had the idea to bring his camera equipment on Christmas Eve to capture a unique perspective of the merriment.

“I was really happy to be able to capture it from the air,” Dryden said of the fires. “I thought it would be cool to get some overhead shots of it.”

He said bringing his aerial photography equipment places “creates its own little awe factor,” as people are curious and excited to see the unmanned aerial vehicle and accompanying equipment.

“What I love about aerials is it’s a completely different perspective,” Dryden said of the photos. “You never expect to see what you see when you get up there.”

He said the pictures he took of the tradition in Lutcher “took off like wild fire” on social media, and he was happy to see so many people enjoy the unique perspective and beauty of something so special to the region.

Dryden said the aerial pictures are taken by attaching a camera to an unmanned aerial vehicle, which is controlled by one person acting as a pilot.

A second person looks into a monitor and sees a live view of what the camera is capturing, Dryden said, and dictates the still photos and videos the camera takes.