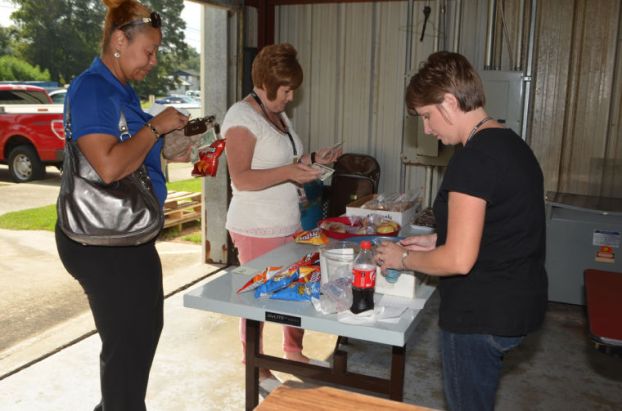 Hotdogs for cancer in St. James

CONVENT – St. James Parish employees put together a hot dog sale fundraiser to raise money for the parish’s Relay for Life team.
In addition to the hot dogs, brownies, pound cake, cookies, chips and 50/50 raffle tickets were sold. Hungry parish employees rushed to fill their stomachs with the inexpensive goodies. Wanda Detillier and Tiffany Chauvin said this year’s goal is to exceed last year’s goal of $10,000.
St. James Parish Relay for Life committee members attended the 2013 Baton Rouge American Cancer Society Evening of Recognition in Feburary, and they accepted several impressive awards on behalf of the parish.
Thanks to the overwhelming support of the community, St. James Parish’s local Relay not only placed in several award categories, but also took home an award as one of the top-earning Relay events per capita in the entire nation. For the 2012 Relay year, the St. James Parish event was No. 2 per capita in Louisiana, No. 5 in total fundraising in Louisiana, No. 8 in the Mid-South per capita and within the Top 10 per capita nationwide. 2012 was the parish’s second consecutive earning top national awards for fundraising efforts.
Chauvin and Detillier revealed a touching motive for their participation in Relay for Life efforts.
“We both lost our dad to cancer, so that’s why we’re really gung ho about it. We do it for the people we know that have had cancer,” said Detillier.
“Hopefully one day they’ll find a cure,” added Chauvin.
The parish also holds other fundraisers on a regular basis, such as football pools, candy sales, can shakes and other hot lunch specials to benefit the cause.