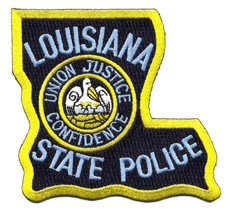 VACHERIE – Shortly before 6 a.m. Tuesday morning, Louisiana State Police Troop C investigated a three-vehicle crash on Louisiana Highway 3127 in St. John the Baptist Parish in which three people were killed and one man was seriously injured after an 18-wheeler crossed the center line.
The investigation revealed that a 2006 Peterbilt tractor truck was traveling north on Highway 3127 near Louisiana Highway 3213. The Peterbilt was being driven by Damion Robinson, 43, of Boutte. For unknown reasons, the Peterbilt crossed the center line of Highway 3127 and entered the southbound lane, where it sideswiped a 2007 Chevrolet Silverado being driven by Chad Hebert, 45, of Chackbay. A 2006 Honda CLX was traveling south behind the Silverado attempting to avoid the crash by traveling onto the southbound shoulder but was struck head-on by the Peterbilt. After the impact, the Peterbilt pushed the Honda more than 120 feet off the road before coming to rest in a canal. The Honda was being driven by Saul Montoya, 42, of Prairieville. Montoya and his two passengers, Lucio Hernandez-Gelindo, 45, of Prairieville and Horacio Cordero-Marquez, 34, of Baton Rouge, were pronounced dead on the scene by the St. John Parish Coroner’s Office. Hebert was transported to University Hospital in New Orleans with serious injuries. Robinson was not injured in the crash. All the individuals involved in the crash were wearing their seat belts except Cordero-Marquez.
Robinson submitted to a breath test and was cleared of any alcohol involvement. Routine toxicology tests are pending at the St. John Parish Coroner’s Office for Montoya. A blood sample could not be obtained from Hebert because of emergency surgery.
Robinson was arrested and booked into the St. John Parish Jail. This crash remains under investigation.