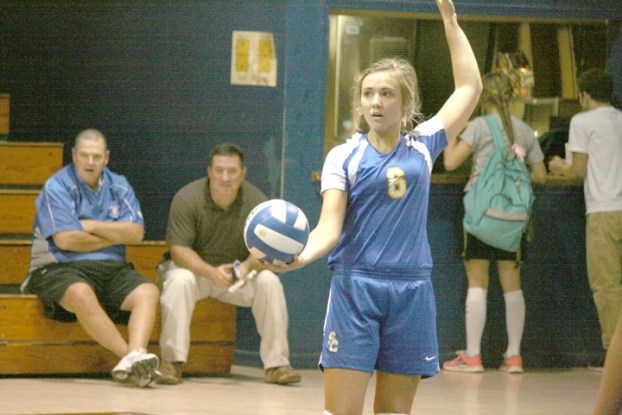 LAPLACE — Coming off of a disappointing District 4-IV loss to Haynes one day earlier, St. Charles Catholic had to regroup to take on a hot West St. John Rams team off to its best start in years Wednesday evening.
The Lady Comets were up to the task, sweeping the Rams by scores of 25-18, 25-17 and 25-19.
It was only West St. John’s third loss of the season. The Rams (9-3) came out firing in building a 6-0 lead in the third and final game, but the Comets went on a 15-1 run to take control for good.
The Comets (7-14) have struggled at times after undergoing much turnover to its starting lineup from last season, but things seemed to be clicking on Wednesday.
“I think in the beginning, we struggled to mesh together. We lost a lot of seniors,” said SCC libero Alyssa Arceneaux. “The process has been tough but we’re getting better. Today we were passing really well and setting up our hitters. Our offense was really strong at times.”
The Comets took early leads in each of the first two games. Slow starts are something coach Glenda Rush said that her team needs to do a better job of pushing through.
“I’ll be a gracious winners and a good loser when need be. But one thing I have to see is that we’re fighting to the bitter end,” said Rush. “Let the coaches worry about the scoreboard. My girls have ability but when their confidence wanes, you can see it out there.”
SCC coach Kristin Sullivan said that one of her team’s issues this season has been holding the advantage after a strong run, but that the Comets did a much better job of that Wednesday.
Middle blocker Kaitlyn Lowry said that, indeed, the Comets set out to take control early — and just as importantly, to keep it.
“Our goal for today was to start on top and keep working. Don’t let them get their footing and come back,” she said. “If you make a mistake, shake it off and battle.”
St. Charles led 13-10 in the first game before a Erin Turncuit kill sparked a 5-0 Comets run. WSJ cut the lead down from their eight-point deficit thanks to an Alante Gauthier ace and a scoring dink by Mychelle Lumar, but SCC clinched the 25-18 win on a WSJ return error.
An ace by Maddie Murphy and a tip by Leia Hill helped lift SCC to an early 6-1 advantage in the second game. This time the Rams stormed back, a kill by Kaieonne Sorapuru and an ace by Gauthier helping WSJ pull within one.
But once again, SCC took a 14-10 lead and then charged to seize the game, two Hill aces helping to fuel a 7-0 run. The Rams made a 5-0 run themselves to rally back to 21-15 but SCC closed it out from there.
The Rams rallied late in the third game as well, turning a 20-13 Comet lead to 22-19. But Kaitlyn Lowry sandwiched a spike and a tip around a Brittany Tregre ace to officially seal the win.
Lowry had eight kills and three blocks to lead SCC, after logging eight kills and four blocks against Haynes a day earlier.
“Defensively, Kaitlyn knows what we need from her. Those blocks get everyone on the team up,” said Sullivan. “You can see the intensity go up and you steal momentum, because they’re so rare in high school.”
Added Lowry, “You definitely feel a rush of adrenaline. It pumps everyone up.”
Rush said that the Comets made adjustments defensively that the Rams weren’t able to consistently take advantage of.
“We’ve got to do a better job of switching things up. If we’re out there always doing the same thing, hitting the same way or going to the same people, teams are going to figure it out,” she said.
Arceneaux said she and her teammates have communicated well defensively.
“We spent a lot of practice time on our defense. We’re talking a lot and setting each other up to make plays,” she said. “Keeping everyone talking has been a big key.”
WEST ST. JOHN DEF. ST. JAMES, HAYNES TOPS ST. CHARLES — The Rams toppled the rival Wildcats for the second time this season, winning 25-12, 25-12 and 25-7.
Sorapuru and Gauthier each had five aces. Sydnei Young added three kills for the Rams.
Haynes, meanwhile, took a 26-28, 25-19, 25-20 and 25-8 victory over the Comets, dropping SCC’s District 4-IV record to an even 1-1.
For St. Charles, Lowry had eight kills and four blocks. Arceneaux had 12 digs. Allison Savoie added five aces and Brooke Tregre had 15 assists.

Rebels look to remain on point against Cohen