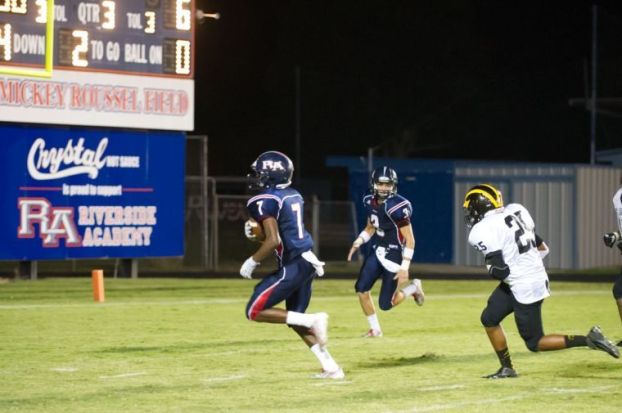 Rebels look to remain on point against Cohen

RESERVE — After his team’s 48-14 victory over St. James Friday night, Riverside coach Bill Stubbs wasn’t the picture of happiness one might expect given the result.
“It’s not about doing the right things some of the time, or when you feel like it. You’ve got to do those things all of the time,” said Stubbs. “To say we were sloppy (in the second half) is an understatement.”
Stubbs felt his team got complacent after building a 38-6 halftime advantage and challenged their focus in the postgame. As winless Cohen gets set to visit the Rebels in Reserve this Friday night, Riverside will be heavily favored.
But Stubbs won’t tolerate a carry over from the second half of the St. James game.
“It’s an opportunity for us to see the maturity of these kids,” said Stubbs. “We’ve come a long way in that area, but this is another test. We need to eliminate the sloppiness as a team. From top to bottom, we need to be a little more efficient in the way we do things, and that’s not only the players, but us as coaches.’
“It’s vital for us to clean some of these things up. This game offers us a lot of inward challenges.”
While the coach wants to see more sustained focus from his players going forward, Riverside (3-1) looked as potent as ever as it put things away in the first half. Deuce Wallace completed 18 of 29 passes for 209 yards, three touchdowns and an interception in just under three quarters of work. Herb McGee was his favorite target, catching eight passes for 89 yards and a score. And after a breakout performance in the fourth quarter of RA’s win over St. James, DeAndre Wilson continued to carve out a role in the backfield for the Rebels, the powerful tailback rushing for 70 yards.
But the star of the night was senior cornerback Xavier Ray, who recovered a fumble and returned an interception for a touchdown — and did so within the first two defensive snaps of the night.
“Xavier is a young man who’s worked extremely hard to gain in size and speed. He’s become a student in what we’re doing,” said Stubbs. “He’s beginning to grow into his position and his confidence is growing. We’re seeing more and more good things out of him.”
One positive development from the second half of action last week was the play of freshman tailback Hardell Mack, who looked explosive at times as he spelled Wilson and starter Brandon Sanders in the second half.
“He’s a prototype running back,” said Stubbs. “The goal right now is to get him bigger and stronger. But he does some things very, very well. He’s now learning what we expect and how to run in our offense.”
Cohen has struggled against a strong slate of foes. In losses to John Ehret, Northlake Christian, Hammond and South Plaquemines, Cohen has lost by a combined score of 189-14.
“Regardless of who we play, we’ve talked about taking control of  ourselves, the things we do and do well,” said Stubbs. “We’ve got an opportunity to go out and find some things out about ourselves and continue to evolve as a football team.”

Rams, Patriots on course for shootout