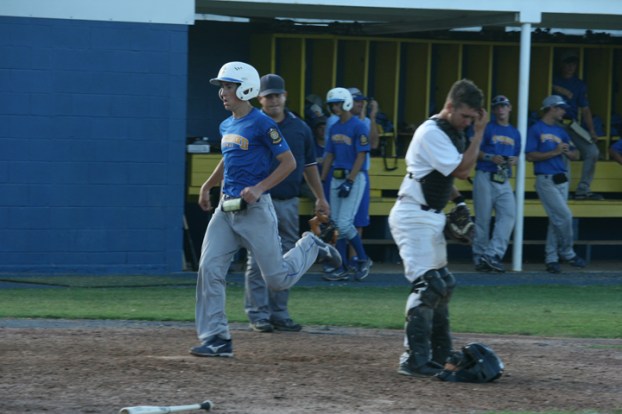 But the lack of offensive production was addressed, and then some, as Townsend outslugged Sandwich World to the tune of a 13-7 victory.

It was the second game of the summer between the two teams, the first ending in a 1-1 tie a week prior.

“We refocused,” said Townsend Homes’ Jon Brown, who reached base three times and drove in a run on the day. “”We just thought about, ‘yes or no’ for each pitch, waited to get the right one and drive it.”

Said Townsend Homes coach Wayne Stein, “Things were a little sloppy on both sides. We gave our kids a couple of days off after playing five times last week. I wasn’t really happy with all the pop-ups we had early, but we did a much better job as the game went on.”

In the first game between the teams, both squads used aluminum bats in the non-Legion affair. Stein elected to go the other way this time, feeling like the change may have done more harm than good.

“Competitive instinct took over that first time, so we went with the aluminum. But switching between them and going back and forth, I thought it probably hurt us a bit, so we stayed with the wooden bats today … to score 13 runs like we did is more than I could have ever asked for.”

Sandwich World took an early 3-0 lead on Phillip Chauvin’s three-run home run in the top of the second inning.

But Townsend Homes responded after Lutcher starter Gavin Englade began to find some control issues in the third. A Connor Smith double led off the inning for Townsend, and Colin Bosco and B.J. Waguespack loaded the bases via a walk and bunt single respectively.

With nobody out, Kameron Keller walked to force in Townsend’s first run, then Justin Ory did the same to make it 3-2. Waguespack scored on a wild pitch to tie the game. With one out, Brown hit a sacrifice fly to push Townsend ahead 4-3. After an Eian Mitchell walk, Sandwich World appeared to be out the inning on a Mason Bordelon fly ball, but a drop in the outfield allowed another run to score, adding up to a five-run Townsend inning.

“I was really concerned after the home run,” said Stein. “But our guys answered, not just putting up one run, but putting up a five spot there. That was big. How you respond to a big moment (like the home run) is the most important thing.”

The Lutcher-based squad shot back, however,  scoring two runs in the next inning after a walk by Nick Bourgeois and a double by Luke LeBlanc with one out set things up.  Sean Brignac drove in a run to make it 6-4, and Sandwich World’s fifth run scored on a wild pitch.

But Townsend slammed the door in the fifth after loading the bases with one out. Eian Mitchell singled home a run, then another scored on an error to make it 7-5. Mason Bordelon hit a sacrifice fly to score another run, making it 8-5. With the bases loaded again, Smith drew a walk to force home Townsend’s ninth run, then Bosco and Waguespack each did the same to make it 11-5.

Sandwich World never got closer than four the rest of the way. Austin Weber added an RBI single for Townsend in the sixth. Townsend added a final run on a wild pitch.

Weber earned the win on the mound, He went 5.1 innings, allowing six runs on five hits and seven walks. He struck out five. Smith and Bordelon closed out the game in relief.

TOWNSEND FALLS IN THREE – Townsend Homes fell 7-0 to Destrehan-based Shell Motiva, 2-1 to Hahnville-based Otto Candies and 8-1 to the Curtis-based Patriots in a trio of games late last week.

Shell scored five runs in the third inning to pace its victory over Townsend.

In Wednesday’s contest with Curtis, the Patriots scored runs in each of the first five innings to eventually take an 8-1 victory over the St. Charles Catholic-based foes, riding a strong performance by starting pitcher Colin Perez.