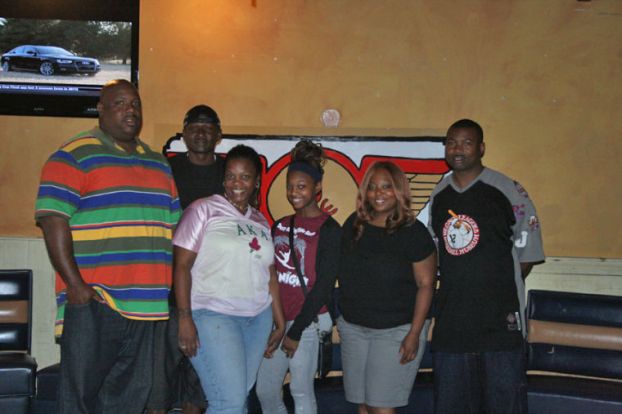 Those affected by violence come together

LAPLACE – A group of local people shared bacon, eggs and juice at a special breakfast Saturday morning at Airline Bar and Grill. They also shared their grief, their memories and the ways they’ve been coping in the wake of tragic loss.
The breakfast assembled more than 30 area residents who have lost family members to violence or accident. The event intended to give those who have suffered loss in the community a chance to convene together and share their experiences with one another.
The event was established by Life Changers Community Social Club, a local group that has come together with the overall goal of uniting the community, be it by helping people who are in need, by speaking out against violence or by holding events that bring people together for socialization and discussion.
“We know this community needs help,” said Niki Parquet, Life Changers president. “We wanted to give people an opportunity to get together and talk about what’s going on.
“Everyone knows each other. We’re a small community. Today, people were able to come in and talk. I thought everyone’s spirits were up.”
Served at the breakfast were grits, eggs, bacon, toast, tea and coffee.
“And some peace of mind,” said Life Changers Vice President Shantoya Francis.
Aside from Parquet and Francis, other group members include Gary Mizell, Xariah Parquet, Altherio Francis and Isiah Howard.
Life Changers was established six months ago, at which time the group began brainstorming events. Last month, it ran a car wash to raise money to purchase air conditioning units for elderly people who lacked such during the sweltering summer months. It was the first event of what the group says will be many.
“That box fan’s not gonna do,” said Mizell. “We were elated to be able to provide a hand there.”
The group also plans to launch a “family day” at the park and also to make the breakfasts a weekly event, with an invitation extended to all members of the community.
“It’s our way of getting the community together at a meeting place,” said Parquet.
A big lift to that effort has been provided by Alan Burl, the owner of Airline Bar and Grill, who offered the venue up free of charge to help the cause.
“He’s been very, very helpful,” said Parquet. “Now we can host a lot of different things. Without him, this isn’t possible.”
A native of LaPlace, Parquet returned to her hometown last year after spending the better part of the last 20 years living in Atlanta. She came back just before Hurricane Issac hit — an irony, of sorts, as she originally left the area after Hurricane Andrew.
Life Changers’ motto is “changing lives today for endless possibilities tomorrow.” When it comes to the subject of violence, Parquet said that too many young lives are being cut short. Those “endless possibilities” are being negated, and she believes that it is no time for inaction. She returned home, in fact, to take action herself.
“I just feel like something needs to be done,” she said. “When I was coming up, two people would get into a fight and afterwards, that would be the end of it. Now, when young people fight, someone ends up getting killed. It wasn’t always like this.”
Mentoring youths and lending a hand to single parent households are two ways the group hopes to make a positive impact on the violence issue.
Another is to add more young club members. The group is open for teenage membership as Life Changers seeks to add a stronger peer influence; Xariah Parquet, Altherio Francis and Isiah Howard are the group’s current teen membership.
For more information about Life Changers, contact Parquet at 404-465-9391.