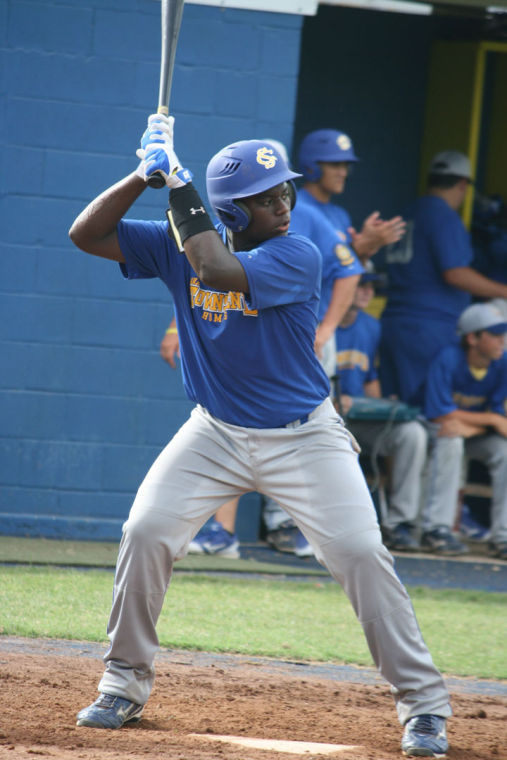 On a day that saw Townsend Homes allow eight runs in one inning to allow a 6-0 lead to slip away, it found a way to win nonetheless, scoring three runs in the bottom of the sixth inning to capture a 9-8 American Legion victory at Comet Field.

Townsend’ Eian Mitchell delivered a bases-loaded two-run single to tie the game in the sixth. Then Mason Bordelon delivered the game-winning RBI, plating the go-ahead run on a suicide squeeze bunt.

“We’ve got seven seniors on this team,” said Mitchell, who will be one of those seven returning seniors next prep season. “You could see it on everyone’s face that they weren’t gonna let this game go. We lost the lead, but we battled back.”

Mitchell’s single went over the head of a leaping Scott Ledet at first to give Townsend the big jolt it needed.

“I was thinking right side. Our coaches have instilled that in us, that good things happen when you go opposite side, to right field.

“We’ve got a lot of leadership on this team. Today, it just so happened to be my turn to deliver.”

It’s the second one-run victory of the summer for Townsend Homes.

“These are the types of games we lost during the prep season,” said Stein. “We went 18 and 15, and we lost eight of those by one run, four more by two runs.

“Even after we gave up the eight … it wasn’t anything we did coaching wise. All I did was go up to our guys about to bat and say, ‘Hey, senior, senior, senior … it’s up to you now to find a way to get this done.’”

The Townsend rally began with B.J. Waguespack’s one-out walk, followed by an Austin Weber single. Jon Brown was hit by a pitch to load the bases for Mitchell.

Connor Smith (2-1) earned his second victory of the summer, netting it in relief after pitching the final two innings.

Townsend Homes seemed to be in complete control after a five-run fourth gave it a 6-0 advantage. Weber, who started the game for Townsend, had allowed just two hits through five innings of work.

But Refuel charged hard in the sixth, loading the bases with no outs. Townsend called upon Bordelon in relief, but he hit Eric Keller to force in a run, while a walk by Matt Keller and a single by Juwan Orticke each brought home another.

Still with no outs, Stein inserted Smith into the game. But Caiden Reid’s triple to left cleared the bases and tied the game. Brandon Guillot singled to put Refuel ahead 7-6. An RBI single by Scott Ledet made it 8-6.

“At that point, I know it sounds funny, but it was big for us to hold it to 8-6 at that point,” said Stein. “They did most of their damage with nobody out. It could have easily been 12-6 and completely out of reach if we’d folded.”

Townsend scored its first run of the day in the third inning on Weber’s RBI infield single.

It added five more runs in the fourth after Mitchell and Bordelon each singled to lead off the inning; after an errant throw went into the Comet dugout on Bordelon’s hit, the game’s second run scored.

An error on a line drive hit by Smith plated another run to make it 3-0. Later in the inning, with the bases loaded, Weber hit a ball that resulted in another Refuel throwing error, and two more runs scored. Mitchell went on to draw a bases loaded walk to make it 6-0.

Colby Johnson took the loss in relief for Refuel.

Mitchell reached base in all four of his at bats, going two for two with two walks and three RBIs.

“We were maybe a couple of at-bats away from 10 run ruling them. Then, all of a sudden, we’re down by two,” said Stein. “But I can’t say enough about the way our guys battled today.”

“Neither team could get that big hit. We had to leave at least 10 runners on base,” said Stein. “They left guys on as well.”

B.J. Waguespack, Klibert and Bordelon combined to allow one run on the mound for Townsend Homes.

Against Brother Martin-based Peake BMW  Friday, Townsend led 1-0 in the fifth inning but couldn’t hold on, as Peake scored four runs in the fifth to take a 4-1 Legion victory.

Smith took the loss, his first of the summer.

By RYAN ARENA L’Observateur LAPLACE – For the first time in his career with the Southern Jaguars, junior quarterback Dray... read more