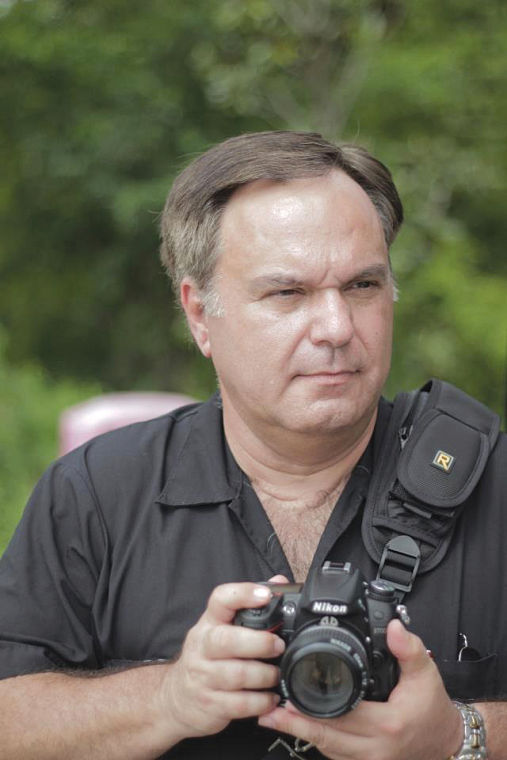 LAPLACE – Harold Gene Franques’s extensive job history has provided him with numerous interesting life experiences, many of which he draws from in his current role as private investigator.
Franques is a native of Opelousas, which lies a little north of Lafayette. He actually began his career in radio broadcasting, at the ripe old age of 11-years-old, when his parents decided that he should have a gig in broadcasting. Franques’s parents knew the manager of the local radio station, KSLO. His experience in broadcast is evident even today in his clear diction and resonating tone.
“I started out at one hour a week on a Saturday from 12 p.m. to 1 p.m.,” he said. “I had my own classical hour. Now can you imagine an 11-year-old pronouncing Tchaikovsky?”
Franques got more air time the longer he worked. By the time he was in high school, he became an experienced local DJ and radio personality. Franques reported the news, spun records and did remote broadcasts from community events. Despite what one would think, Franques said that the job had no effect on his social life and that he was still somewhat bookish in school.
At some point after high school, Franques began to desire change.
“I saw even at that age that I wasn’t going anywhere. I said, you know, I’ve got to do something to get my life on a track to success, rather than going nowhere at all. I wanted to experience more. I’m the type of person that won’t let grass grow under my feet,” he said.
The young man decided to join the military. At the time, the nation was in the midst of the still-controversial Vietnam War, and the draft was still in effect. Franques said it was not likely his draft number would have been called, and he was very intent on joining, probably because of the influence of his father, who told him that service for his country was something a man can always have pride in.
He was impeded by his flat-footed condition, however. After being turned away following a medical physical, Franques was able to get around his condition with a little editing of records.
“They sent me back home, and I went to the recruiter and said ‘You’ve got to get me into this war. I want to go into the military!’ And he said ‘You want to go?’, so I say ‘Heck yeah,’” said Franques.
“They sent me back, and the doctor walks up to me with my medical records. He looks at me and says ‘Son, you want to go in?’ I say ‘Yes, sir!’ He takes my medical records, rips them up in front of me and throws them in the garbage. Then he takes some blank sheets and fills them out. All of a sudden I’m not flat-footed anymore.”
Franques joined the Air Force shortly afterward. His military career lasted about seven years. Franques owes a large portion of his life stories to his work with the military, as he was required to travel all over the world. In addition to actual combat, Franques worked for the North American Aerospace Defense Command and the American Forces Radio and Television Service, where much of what he accomplished remains classified. Franques said that he had been “various people” during his military experience.
Franques also worked as a police officer with the Lafayette Sheriff’s Department after he left the military. He was with the agency for about five years and worked his way up the ranks.
“Because of my years in broadcasting, I have what people consider the ‘gift of gab.’ I think that because of my life’s experiences my personality has evolved. It’s evolved for the better. I think i’m better person now than when I was 20 years old,” he said.
With his background in both law enforcement and military, Franques was moved to open up a private investigation agency last year. Franques said his old partner from the sheriff’s department left around the same time as him and had started one himself. Franques worked under his former partner for a while and then started his own. Franques said business is growing steadily but is still in the walking stage for now.
In a small town like LaPlace, one might think that there is not much market for such an industry, but Franques said the town is growing and so is the need for such services. In addition, he said he gets a lot of business from surrounding towns who’d like a service that’s close, but not too close.
“I think I found my niche at this point in my life. What’s good about it is that I can work it my convenience. My life is full right now,” he said.
But that’s not the only thing that Franques has on his plate. Franques said that with more than 20 years in the radio and television industry, he decided he wanted to see what the other side of the entertainment industry was like.
He took up acting. Though he never had an official acting class, Franques learned to act from past experience in television and during his career in law enforcement.
He hasn’t been at it for long, but the multi-talented man can already list the film “Contraband,” a major film starring actor Kevin Bacon among his credits. Franques is also an executive producer with Savage Light Studios, a New Orleans-based film company. He has contributed his acting skills in several episodes of “Project Z,” a cross-genre drama set during the zombie apocalypse, in which he has played at least two main roles. He has also worked as a precision driver, stand-in, photo double and body double in other major feature films.
With such a busy life, Franques said he does not feel the least bit of regret because he is doing the things he loves.
“Balancing it all is not a problem because I like everything that I’m doing. I stay busy,”he said.

VACHERIE – On Wednesday evening, the St. James Parish Council adopted a previously dicussed mosquito-spraying ordinance, but not without some... read more