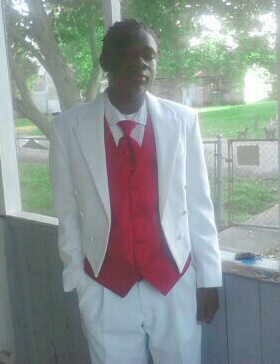 RESERVE – Michelle Greenup, the mother of slain 16-year-old Kyrian Gray, said she does not feel any personal victory from the recent arrest of the suspects involved in her son’s murder.
Greenup said her feelings have nothing to do with the age of the suspects.
St. John the Baptist Parish Sheriff’s Office detectives arrested Ali Batiste, 19, and Aaron Gregoire, 19, both of LaPlace, last Monday in connection with the homicide of Gray. The previous Saturday night deputies responded to a residence on Amy Drive to clear a crowd from a raucous party. As deputies dealt with the crowd control, they heard gunshots. Several houses down from the party, deputies located Gray with a gunshot wound to the chest. He was transported to River Parishes Hospital, where he succumbed to his injuries.
“It’s no happy thing or anything like that. I’m still a mother after all, and it could’ve been the other way around,” said Greenup. “It’s a process that has to be done, so it’s nothing I feel, to be honest. I forgive them, and I gave it to God, and I know he’s going to take care of it.”
Greenup said Gray was an outgoing, fun-loving child who loved sports and taking “selfies” with his cellphone. He was nicknamed “Giggles” because he always had a smile on his face.
Greenup said she was in Jacksonville, Fla., at the time of her son’s shooting and is still very unaware of what happened that night. Greenup said she was not previously made aware that the house party was going on at all.
“There was a stinging. I thought it was a joke. I went to make some phone calls, and I was just asking for updates. The sheriff spoke with me and let me know that he had been shot and he’s going to do the best he can to get to the bottom of what happened,” said Greenup with a sigh.
Gray’s grandmother, Lorenza Smith, recently unearthed a letter he had written to her and his mother around Mother’s Day this year, a little more than two weeks before his death. The two-page, handwritten letter is full of gratitude and love for the women.
“I can’t explain how I love y’all both. I’m sorry if I ever hurt you or my mother in any kind of way — I’ve done some bad things in my life, but you always had me. You’ve got to learn from your mistakes. Thanks for all the whippings. No one in this world can take your place. My heart will always have an image of you. You wonder why I always have a smile on my face, it’s because my life is so amazing with you in it,” wrote Gray.
Smith said she believes that Gray subconsciously knew something was coming and used the letter as a way to say goodbye.
Greenup is thankful for the overwhelming support from the community and said it lets her know what type of child Gray was and how much he touched the community. Students from his sch
ool have made tributes to him on YouTube and have even held regular candlelight vigils in his name. Greenup said that there isn’t a day that goes by where she doesn’t receive a visit from one of his friends.
Times are still rough for the family, but Smith and Greenup said they are taking it day by day. The family has opened a memorial account in Gray’s name at Capital One Bank. Gray’s burial services were held on Saturday, June 1.