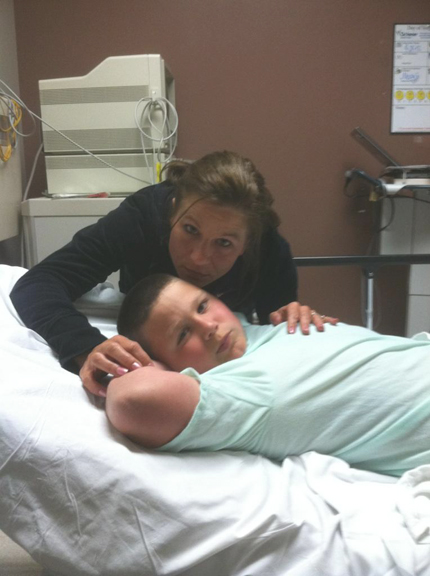 LAPLACE – Kerry Cambre, an employee of St. Catherine’s Hospice, is facing a tremendous obstacle in her personal life.
Her 10-year-old son, Tyler, is facing major surgery for a tumor lodged on his optic nerve. The cancer is called an astrocytoma, a type of brain cancer that originates in the star-shaped astrocyte brain cells of the cerebrum. This will be young Taylor’s second major surgery for the same tumor. His first surgery was just a year ago.
Cambre said they initially discovered the tumor when Tyler began to have trouble playing sports.
“We signed him up for a travel team. He started travel ball, and all of a sudden he started missing the ball, which was so not like him. We would ask ‘Why are you missing the ball?’ and he says ‘Because I see two of them. I don’t know which one I’m supposed to be catching.’ So then we knew something was definitely wrong,” she said.
Cambre took him to the eye doctor who then set him up with emergency magnetic resonance imaging. After receiving the diagnosis, Cambre said her family tried their luck at Children’s Hospital but were “sent on their way.” Cambre said she decided on Ochsner Health System’s Dr. Cuong Bui after doing some research.
Bui was only able to remove 80 percent of the tumor in the first surgery because of its location, but Tyler pulled through fine. The boy was then supposed to move on to radiation treatment at MD Anderson Cancer Center in Texas, but doctors advised Cambre to wait because they said radiation makes tumors bigger initially.
Cambre said her son has had regular MRIs done since then, but doctors found the tumor had grown to nearly the size it was before surgery at their most recent procedure.
Cambre is afraid for her son but said she tries not to let him know it because he is a caring, sweet-natured person.
“It’s hard to be able to get up every day and go on. It’s very difficult to be normal when that’s all you think about,” she said.
Tyler does not complain much about his condition nor does he seem to be in much pain.
“He gets headaches. The painful part for him is the fact that his life stops. He plays baseball and football, and he’s had to miss so much school. It’s so much for a little boy. The only thing he really complains about are the things he can’t do anymore. He misses his friends at school. He’s an active kid, and right now he just can’t be. You just wonder why,” she said.
Tyler will need proton radiation for his treatment, a type offered by the MD Anderson Cancer Center. The treatment is very expensive, and the family will have to pay out of pocket for it. Cambre and her family are preparing to leave town for his surgery and treatment on June 12. The couple will be out of work for at least six weeks with no additional income.
“We have a house and everything here, and then we’ll have to pay for another life there. it’s expensive, but you can’t really think about that part. We’re going to do whatever it takes and it doesn’t matter. He’s our only child. He’s such a wonderful kid. He’s just a sweet caring little boy. He worries more about me and his dad than he does himself,” she said.
Terri Van Camp, the owner of Creationz by You, a brand new art workshop in LaPlace, took it upon herself to help raise money for the family by organizing a painting party last month, at the request of her employee, Misty Moore.
Tyler and Moore’s son are in the same class at Riverside Academy and played baseball on the same team, so the fundraiser was something of a personal mission. Van Camp’s painting party raised approximately $300 for Tyler and his family.
“It was an opportunity to help somebody. In doing that, we plan on having more fundraisers for him. We’ll do it for any other individual who contacts us. It’s a matter of having empathy for the other individual,” said Van Camp.
Cambre said she hopes for the best in the upcoming surgery is very grateful for the support of the community. The family has established also established a donation account in Tyler’s name at Capital One Bank.