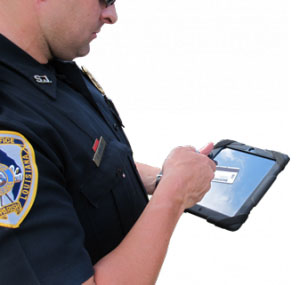 LAPLACE – The next time you get pulled over for a traffic violation in St. John the Baptist Parish, don’t be surprised if the deputy handling the incident uses an iPad or iPod Touch to process the citation.

The Sheriff’s Office recently started using a unique form of data collection software built for Apple devices that allows officers to enter citation data into a handheld device while interacting with drivers. The software uses a scanner to download driver’s license and vehicle information that is entered into an e-ticket.

“Instead of the officer having to return to his vehicle to enter information onto an onboard computer, the data is laid out into drop boxes on the device,” said Sheriff Mike Tregre. “The officer checks the information, the driver uses a stylus to sign the citation, and the officer prints the ticket out right in front of them.”

In addition to producing a ticket instantly, Tregre said the software simultaneously sends the citation information to the Sheriff’s Office, the District Attorney’s Office and the Clerk of Court’s Office. He said the St. John Sheriff’s office is currently the only agency in the state that is using the software.

“Other agencies are calling me to see how it works,” Tregre said. “They want to get in on this too.”

Maj. Troy Hidalgo, commander of the Sheriff’s Office’s Technology, Communications and Records Division, said the e-ticket program is a product of about a year’s worth of research and planning. He said the program went live on Memorial Day weekend, when 14 deputies were outfitted with iPod touch devices equipped with the software. He said the Sheriff’s Office recently added 10 iPads as the next phase of the program.

Hidalgo said the Sheriff’s Office averages about 200 tickets per month and everything is entered by hand. He said the automated process is not only saving time, it is also saving paper.

“So far our officers are really pleased with the results,” Hidalgo said. “With the link to the other parish agencies, there is no longer a need for redundant data entry. Information is sent immediately so that the courts can be alerted. We have also launched a program that allows violators to pay online.”

Hidalgo added that no data is saved on the devices. He said once a ticket has been printed and sent back to the Sheriff’s Office and District Attorney, the data is off the device.

“It wouldn’t have enough memory to hold it all,” Hidalgo said. “Once it is scanned, it is gone.”

Hidalgo said the e-ticket feature is just the first in a wide range of uses for the new system. He said with the devices’ ability to take photos and record audio they can be used for summonses, field interviews, arrest reports and regular security rounds at local businesses.

“Take the business security checks as an example,” Hidalgo said. “In the past, an officer would make a sweep checking doors to make sure things are secure and leave a card for the business owner. It doesn’t leave us with any record of when the business was checked and if the owner even knew about it. Now, we can use this device to scan a barcode on the building that would send a report back to us and to the business owner.”

“There has been quite a bit of national talk about it,” Tregre said. “It reduces errors and improves on efficiency.”