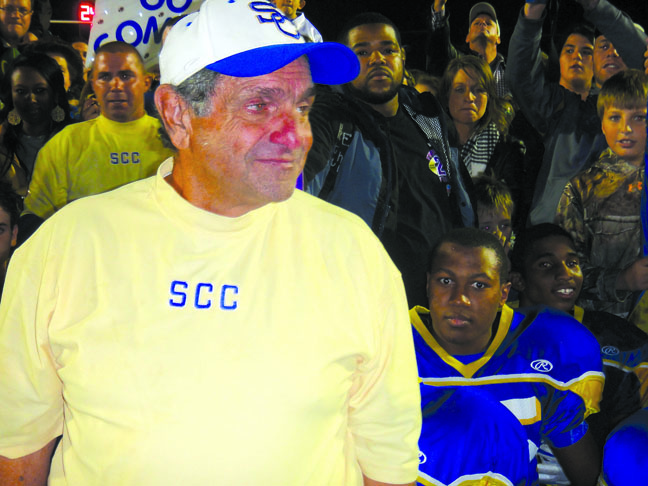 The veteran Comets coach has been extremely busy over the past few weeks: St. Charles’ football camp wrapped up last Thursday, and Monica recently had a hand in the local Manning Passing Camp, as he does annually.

But new on the agenda was a trip to Canton, Ohio last week. Monica returned early this week from a journey to participate in the NFL/ USA Youth Football Summit, which assembles nearly 200 youth and high school football coaches from all 50 states and Washington D.C., along with youth football league commissioners.

Monica was selected to participate after a football season in which he led St. Charles to the first state championship victory in school history, a Class 3A crown secured in a dramatic 9-7 win over Amite in the Superdome last December.

The meeting of the minds focuses on furthering the betterment of both the game and its young athletes, with a primary focus on safety.

Among topics discussed were the importance of concussion treatment and prevention; injury prevention; heat and hydration educational age appropriate teaching methods; and ways to inspire young football players to reach their potential both on and off of the field.

The summit lasted two full days on July 18-19 and was held at Kent State University.

The participants in the summit were invited to visit the Pro Football Hall of Fame, which was closed down to the public as to allow them an exclusive look at the museum.

“We had dinner there, then we had a chance to walk around and take it all in,” said Monica. “That’s something I wish that every fan of the game could experience. It was really something, really first class all the way.”

Monica said that the trip certainly kept the trend of a busy summer going.

“There were a lot of meetings to attend,” he said. “One after another. We broke up into groups to discuss different ideas.”

Perhaps the most valuable part of the trip, Monica said, was the ability to network with other coaches and exchange ideas with some of the nation’s best and brightest — not just at the summit, but going forward.

“The acquaintances you meet … I’ve already exchanged e-mails with some to share ideas,” he said. “A lot of us have promised to stay in contact.”

For a young, aspiring football coach, he said, that aspect of the trip would be the most helpful of all.

But even for a veteran like Monica, the summit provided tremendous benefit.

“I’ve been coaching football for 42 years,” said Monica. “but I learned an awful lot.”