Local veteran has led a life filled with movement 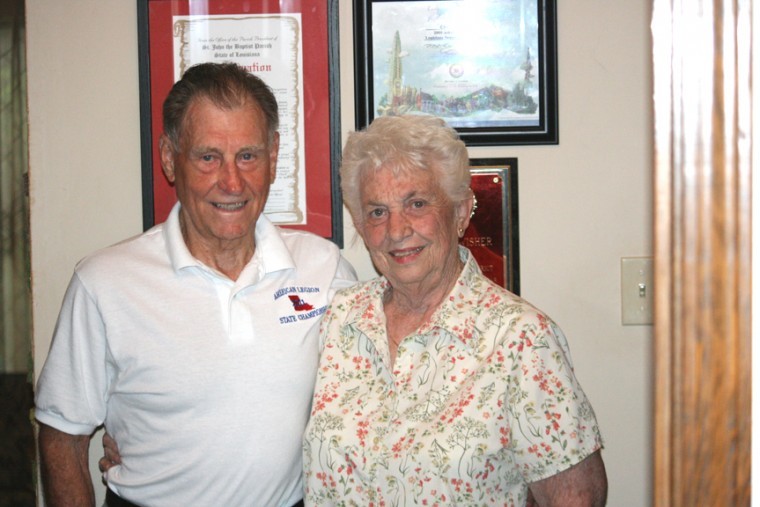 LAPLACE — Chuck Wisher likes to stay on the move.

On their wedding day 57 years ago, Wisher and his wife, June, got set for their big move to California … later that day. They were married at 10 a.m. in Destrehan, and by 3 p.m. they were in their car, headed west.

“We like to keep busy,” he said with a smile.

Wisher, a LaPlace resident, certainly has done that throughout his life and continues to today. Whether its that of a World War II veteran, a baseball coach, a senior Olympian, an accomplished bowler, an American Legion head honcho or a father of five, Wisher, now 86, has worn many hats throughout a rich, eventful life.

Baseball fans of the local River Parishes prep teams might know Wisher as the chairman of the American Legion Second District. Its West division is comprised of teams based from St. Charles Catholic, Destrehan and Hahnville high schools, the latter two headed to Lafayette to compete for the Legion state championship.

“It’s been a real pleasure for me to get to know the coaches and players,” said Wisher, who was appointed as chairman in 2005. “I love seeing (players) grow, develop and reach a new level of playing the game.

“I like to watch the game very closely. How players take infield and approach their at-bats, and how the umpires are calling the games from day to day.”

It doesn’t hurt, of course, that June is an avid baseball fan herself.

“When I’d coach my son Daniel, we might have five games a week in different leagues,” said Wisher. “If she hadn’t been such a baseball nut, she’d have never seen me.”

Athletics counts as one of Wisher’s passions, and not just as a spectator. In 1989, Wisher began competing in Louisiana’s Senior Olympics after being asked by a friend to join him to compete in the doubles bowling event.

“The funny thing about it was, as it turned out, he couldn’t participate because of a mistake with his paperwork,” Wisher said. “So I ended up with another guy. We’d never seen each other before.”

It wouldn’t matter. The duo captured gold medals in the doubles, the first of many victories for Wisher, who made winning a habit: he’s won, he estimates, around 350 medals, some of which are displayed around his home.

Horseshoes, the javelin, the discus, football throwing accuracy and distance and the 100-yard dash are among the events he has competed in at the yearly events.

“One year, we even did spelling and geography,” he said with a laugh.

Part of the American Legion Code of Sportsmanship beckons participants to pledge to “keep a sound soul, a clean mind and a healthy body.”

Wisher takes that to heart, a disciplined man who eschews drinking alcohol and smoking.

“I’ve just seen too many guys really hurt themselves in the way they treated themselves,” he said.

A sizeable portion of that mental discipline stems from the time he spent serving the country as part of the United States Army Air Corps, a precursor to the Air Force of today.

He served for 25 months total, including 13 months overseas during World War II.

Wisher was a gunner on a B-29 Superfortress plane during the war. He said that the experience forces a young person to mature quickly.

“You grow up real fast,” he said. “You learn to be a man at a very early age because you see a lot in a very short time. If you’re able to absorb it all and get past it, it helps to make you a real solid citizen.”

Serving with the Air Corps, he said, taught him the value of teamwork and accountability.

“Being on a crew with 10 other guys and developing relationships with them … the reliability we had between us and the way we worked together, that’s something I’ll never forget that helped shape me.”

The Wishers moved back to LaPlace for good in 1984 upon Chuck’s retirement from his position at a chemical plant in Illinois as engineering superintendent.

They have five children, Daniel, Karen, Stephen, Maureen and Allison, each of whom has grown up and established successful careers for themselves.

As for Chuck, while he’s long settled down in LaPlace, he continues to stay on the move in his own way.

“Even if it’s just doing things in my yard, I do my best to stay as active as possible,” said Wisher.