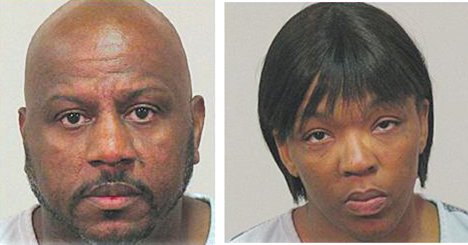 LAPLACE – Three months after their arrest by U.S. Marshals in Georgia, the Louisiana Attorney General’s Office said Monday that the extradition process to return Reserve residents Errol and Tonya Victor to St. John the Baptist Parish is now complete, and the couple now awaits trial in their second-degree murder case in the death of their son, 8-year-old M.L. Lloyd III.

The Victors arrived back in the parish Saturday, according to Laura Colligan of the Attorney General’s Office Public Information Office. The St. John Sheriff’s Office said the couple was booked at the parish jail on charges of bail jumping. They were later transferred to another facility outside the parish where they are being held without bond.

A brief hearing was held Monday in which the Victors were appointed counsel. District Court Judge Sterling Snowdy stood in for trial Judge Mary Hotard Becnel, who is out of town. Snowdy said the courts must assign counsel to any alleged criminals who enter the parish jurisdiction within 72 hours. He said the Victors were assigned to the St. John Public Defenders Office despite the fact that the couple has private counsel in attorney Lionel “Lon” Burns, who is still representing them. No other court dates were set.

The Victors were initially arrested in 2008, when they were accused of severely beating Lloyd, Tonya’s son and Errol’s stepson, as part of a punishment. The couple took Lloyd to River Parishes Hospital, where he was pronounced dead. The Victors contend that Lloyd suffered a severe asthma attack and stopped breathing.

Since the initial arrest, the Victors were indicted three times and have also made several attempts to delay prosecution, including the hiring and firing of multiple attorneys. The couple was out on bail when they fled the area Aug. 15, when their case was called to trial.

When the Victors skipped out on their trial and fled the state, they forfeited about $700,000 in bond money. When they failed to show in court in August, Becnel ordered the couple be held without bond once they were apprehended. The couple had cut off all electronic communication with family.

U.S. Marshals and Tift County, Ga., sheriff’s deputies arrested the Victors on April 14, when they were tracked down in Tifton, Ga. The couple was living in the area for an unknown amount of time under the guise of a preacher and wife trying to start a new church. The Victors were found in a trailer home with no electricity a day after a story on the 2008 murder case was featured on the television show “America’s Most Wanted.” The couple had been on the run since August.

The couple was not cooperative when arrested and refused to voluntarily be returned to St. John Parish. The state Attorney General’s Office, which is handling prosecution, had to secure a governor’s warrant for extradition, which took about three months. The Attorney General’s Office was appointed as prosecutors in the case after the St. John District Attorney’s Office recused itself from the case back in 2009, when it was determined that an assistant district attorney had previously represented Errol Victor in various business matters.

No new trial date has been set.