St. John turns the page as Tregre sworn in as sheriff 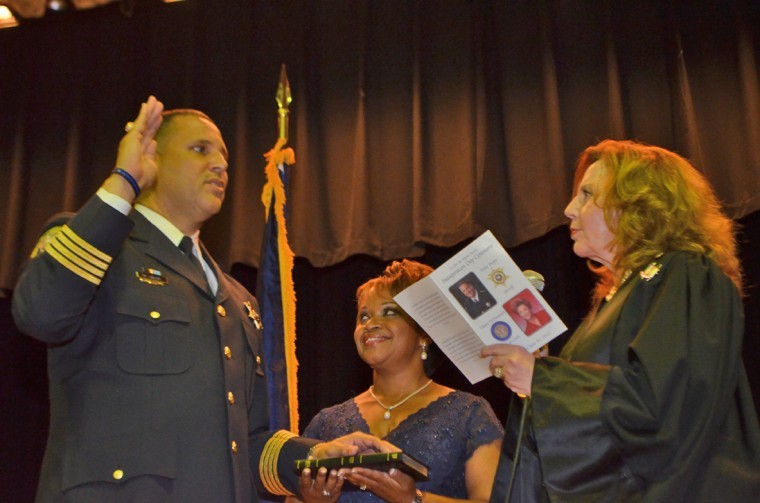 RESERVE – St. John the Baptist Parish residents and government leaders gathered in Reserve Saturday to celebrate the beginning of one elected official’s career and the continuation of another’s as Sheriff Mike Tregre and Clerk of Court Eliana DeFrancesch were sworn into office during a ceremony at the East St. John High School gym.

Tregre, 45, became the 24th Sheriff of St. John Parish, another milestone in a law enforcement career that began in 1986 at the Orleans Parish Prison under Sheriff Charles Foti. Tregre shared a story during his speech to those gathered about how he made his way back home to St. John, where he spent more than 20 years in the department as a jailer, patrolman, undercover narcotics detective, investigator and internal affairs deputy.

“I was commuting back and forth to New Orleans at the time, and my father, Wilbert ‘Trigger’ Tregre Sr., could see that it was putting a strain on me,” Tregre said. “He went to speak with Sheriff Lloyd Johnson, who said there was a similar job available. I applied and got my approval.”

Tregre addressed Johnson in the audience and got emotional when recalling the story about the favor his father asked of the sheriff.

“I hope that I’ve never done anything to make you regret the favor you did for ‘Trigger’ Tregre,” said Tregre as he held back tears thinking about his father.

Tregre was elected sheriff in October after he soundly beat out his former boss, Wayne L. Jones, who was seeking one more term. In the eight months between the election and his inauguration, Tregre worked to reorganize the Sheriff’s Office, shifting personnel to different departments and rigorously training deputies to be more prepared for what lies ahead.

“It is a profession where every day we must be prepared to either save a life or give a life in our efforts to protect the community,” Tregre said. “My goal is to have the best prepared Sheriff’s Office in the state.”

“More officers will be out covering smaller areas of the parish,” Tregre said. “The goal is to increase the visibility of our force so that residents know we are out there tackling the crime problem. I want to restore St. John as a great place to live, work and raise a family.”

Tregre also said he wants all of his deputies to fully understand the cultural differences in the community, specifically when dealing with age, sex, race, sexual orientation and religion. He said every call, from a stolen bike to a stolen car, will be taken with equal importance.

“My deputies are going to get out and talk to everyone,” Tregre said. “I want to build a trust between the community and my office. It is the best way to bring our community back.”

DeFrancesch is entering her fourth term as Clerk of Court after beating out two other opponents in the October election. She said in her speech she will work to continue to strengthen the lines of communication between her office — which is responsible for elections, jury assignments, real estate transfers and other legal processes — and the community. She used her time to remind residents to register as soon as they can.

“The last day to register in St. John Parish for the November election is Oct. 6,” DeFrancesch said. “My office will use television and other media outlets to spread awareness that will result in higher voter turnouts.”