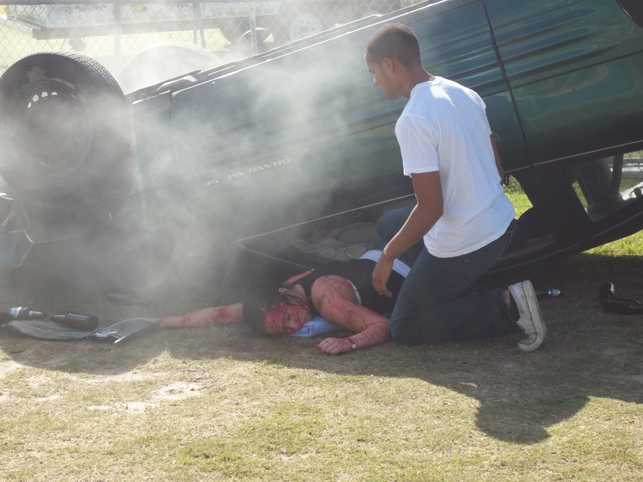 LAPLACE – As prom season draws closer for high schools in St. John the Baptist Parish, juniors and seniors from the area were treated to a vivid but valuable lesson regarding the dangers of drunk driving.

Officials from the St. John Sheriff’s and Fire departments joined with representatives from State Police, Acadian Ambulance, Millet Guidry Funeral Home and the parish court system to produce a mock crash Thursday morning on the grounds of St. Charles Catholic High School in LaPlace. High school students from the area played the roles of teenagers involved in a crash after a night of drinking at prom parties.

“We try to stage the events every two years and only invite juniors and seniors so that no one has to go through it twice,” said Master Trooper Christopher Maurin of St. Police.

“This performance is as true to life as it can be. Our goal is to emphasize to these kids the deadly consequences of drinking and driving,” he added.

Organizers select two students from each school to play the roles of the teens in the crash.

Maurin said the scenario follows an incident from crash to conviction. The responsible party is shown going through a sobriety test, getting arrested, going to trial and being sent to jail. Meanwhile the victims are airlifted to a hospital or taken away in a hearse.

Parents are also involved as State Police notifies them of what has happened.

“We typically see a wide range of reactions from the students in the audience,” Maurin said.

“They start out laughing at their classmates, but once we get down to taking away the deceased student in a body bag and hearse, the mood gets very solemn and silent.”

Some of the students involved as role players in the crash called the experience “emotional” and “very serious.”

“Not a lot of people get into a body bag and live to talk about it,” said senior Whitney Rizzuto, who played the role of a dead on arrival victim. “It’s a hard thing to deal with.”

Senior Peter Katterjian, who was airlifted away from the scene, said the mock crash was “a life changing experience and a real wakeup call for myself and the entire student body.”