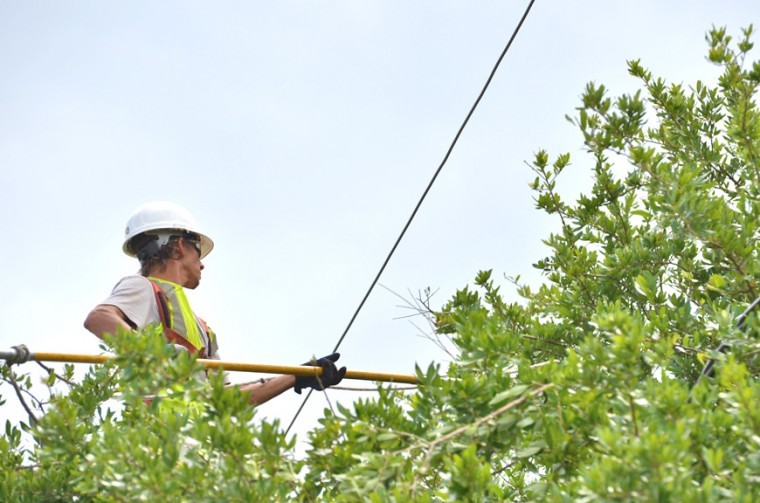 LAPLACE – Storm season may still be several weeks away, but the crews at Entergy know preparing for the unexpected is a year-round job.

Zeringue said right now is one of three major times of the year that crews fan across neighborhoods looking for evidence of “burning,” which is when a tree grows too close to a power line resulting in dead branches.

“See that dead limb at the top,” Zeringue said, pointing to a small, leafless patch at the top of a tree on Walnut Street in LaPlace.

“We trim year round,” said Entergy Louisiana Vegetation Management Manager Steven Hoover, “But there are special times that we basically do more patrolling.”

He added, “We like to have 60 percent of our maintenance plan complete before hurricane season starts.”

It takes a trained eye to find the trouble spots, according to Zeringue and Hoover. Although most would think that periods of high rainfall produce the most dangerous circumstances because of the higher rate of vegetation growth, they said drought is a bigger concern because unhealthy trees pose a significant danger.

“Trees don’t respond immediately,” said Zeringue. “When it starts weakening the structural integrity of the tree, you don’t see it for a few years.”

While crews are always on the look out for trouble spots, Entergy welcomes calls from customers with concerns about vegetation near power lines. In fact, state law prohibits anyone not licensed with the respective power company from trimming anything within 10 feet of a power line.

“The public is starting to be aware of the 10-foot rule,” said Zeringue.

“Something can happen so quick,” added Hoover.

Entergy contracts with businesses such as Nelson Tree Service to do the actual trimming, but the workers who perform the tasks are specially trained in electrical awareness.

“These guys really need to be credited for what they do,” said Hoover. “If (the public) knew the training these guys go through. I trust these guys with my life.”

Those doing the trimming must not only contend with the safety issues, but the end result of the trimming must be in accordance with horticultural standards, so residents should not worry that their tree will be “butchered” if Entergy comes out to trim it.

Added Hoover, “I don’t want unhealthy trees next to our lines.”