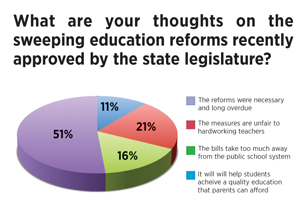 LAPLACE – Widespread reforms to Louisiana’s public education system that were proposed by Gov. Bobby Jindal gained overwhelming approval from state legislators as they sailed through both houses with little opposition.

The bills will make it harder for teachers to gain tenure while establishing a statewide voucher program for private school tuition and multiplying the ways to create charter schools. The bills also lessen local school board authority in hiring and firing decisions, expand online schools and restructure public financing of education.

Approval of the overhaul is also fairly overwhelming in the River Parishes, according to results of L’Observateur’s online poll. More than 50 percent of those who responded said the reforms were necessary and long overdue. Another 11 percent said the changes would help students achieve a quality education that parents can afford.

There is a faction, however, who believes the reforms are unfair to hardworking teachers and think the bills take too much away from the public school system.

A complete breakdown of the results is as follows:

• 11 percent of respondents said, “It will help students achieve a quality education that parents can afford.”

• 21 percent of respondents said, “the measures are unfair to hardworking teachers.”

• 16 percent of respondents said, “the bills take too much away from the public school system.”

• 51 percent of respondents said, “the reforms are necessary and long overdue.