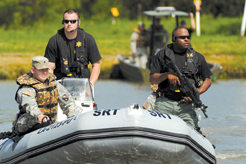 NORCO – With the 2012 hurricane season on the horizon, several state and local agencies joined with the Louisiana National Guard for a unique training exercise in the Bonnet Carre Spillway in an effort to test disaster preparedness and their ability to respond.

The Governor’s Office of Homeland Security and Emergency Preparedness sponsored the exercise, which also took place at a high school in Cameron Parish.

“The exercise validates not just our hurricane plan, but also an all-hazards approach, to make sure that it is coordinated well with the state’s emergency response plan,” said Brig. Gen. Glenn H. Curtis, adjutant general of the National Guard. “We want to make sure we instill confidence in our citizens so they know that when a disaster hits, we are prepared to respond to any emergency in order to protect them and their property.”

It was the first time in three years the corps has organized the Disaster Response Exercise in the spillway. According to a release from the National Guard, the Deepwater Horizon oil spill in 2010 and the operation of the spillway flood control structure disrupted scheduled exercises in the intervening years.

The training showcased the National Guard’s ability to respond quickly to any and all emergency situations by conducting simulated air, water and ground search and rescue operations at various locations within the spillway. Other areas of training tested security, commodities distribution and interoperability communications.

“The most important component of any all-hazard event is the ability to communicate,” said Lt. Col. Dallas Jones, the commander of the 2nd Battalion, 244th Aviation Regiment. “By having this ability, it gives us the opportunity to leverage our assets by allowing us to send help where it is needed. In addition, our leaders have situational awareness and a common operating picture.”

With this enhanced training under their belts, some guardsmen said they are more capable of doing their jobs and working together as a team to serve their communities during disasters.

“It was exciting to get more hands-on training and be able to gain more experience,” said Pfc. Desirae Skipper, a bridge crew member for the 2225th Multi-Role Bridge Company. “The more knowledgeable you are in your military job, the better leader you will become.”