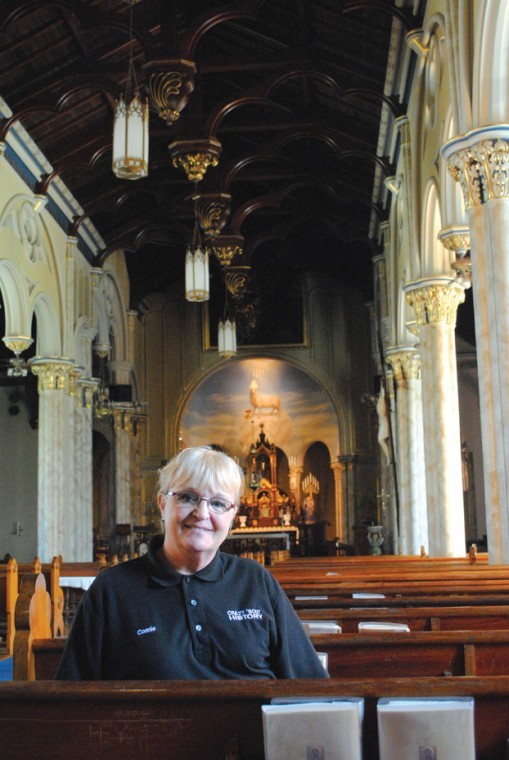 CONVENT – Some might call it an obsession. Others might think it’s just plain crazy — and that’s alright with Connie Donadieu, the driving force behind the St. James Parish-based Crazy ‘Bout History.

What’s crazy to Donadieu is that local residents don’t know more about the history of the area.

“There are so many people in this area that don’t understand the history. The history along the river is just amazing,” said Donadieu, adding, “You can’t have a future without a past.”

The Pennsylvania native said her interest was first stoked by a seventh-grade history teacher who was so passionate sitting in the front row of her class could be hazardous.

Of course, the history of industrial Pennsylvania is quite different from that of southern Louisiana, but for Donadieu, that was much of the draw.

Donadieu got her start locally as a tour guide at one of the local plantations, where she stood out as being particularly knowledgeable. She said she would often answer tourists questions after the tour and was sought out for her insight.

“I realized how little of the history people were getting,” she said.

Then, she and her colleague, Brenda Mitchell, decided to take their knack for local history and start their own tour group. It was during these tours that Crazy ‘Bout History’s claim to fame — a sort of blend between historical re-enactment and entertainment — was born.

“Brenda would play Sojourner Truth, and I became the plantation wife,” said Donadieu. “It was all historically correct.”

It was also at this time that Donadieu learned an important aspect of presenting history to the masses.

“If I have a visual, they’re going to remember it,” she said.

Unfortunately, Hurricane Katrina came along and destroyed that version of Crazy ‘Bout History, but from its ashes a new, non-profit version was born.

Shortly after attaining its 501(c) status, Crazy ‘Bout History began its “Gone But Not Forgotten” cemetery tours at St. Michael’s Church and Cemetery in Convent.

The event took visitors on a trip through time as they got to interact with characters from the past who regaled them with little-known stories from local history. Donadieu herself even learned quite a bit along the way.

Speaking of last year’s tour, she said, “I didn’t know that four kids drowned in the river right there.”

After doing the tour for five years, however, the group has moved on to other projects in 2012, an auspicious year to do so since it is the bicentennial of Louisiana attaining statehood.

In celebration of the milestone, Crazy ‘Bout History is holding a blowout for the ages May 5 on the grounds of St. Michael’s, which, according to Donadieu, is the oldest church on the east bank of St. James Parish.

The celebration will take place from 9 a.m. until 7 p.m. and will feature cook-offs, living history tours, food, old-time games, music, antique cars and historic crafters among other attractions. There will also be a number of historical artifacts on display both from the local historical society as well as Donadieu’s own collection.

“I have the suit that my father-in-law wore when he came here from France at age 11,” she said.

Another highlight of the day will be a Cajun Mass, said in French, at 4:30 p.m.

“We try to do more than what people expect. During the celebration, we will be dressed in costume, spiking people’s interest,” she said, adding, “If you come here, and there’s nothing that interests you, you have a problem.”

She said the event is still in desperate need of volunteers, re-enactors and monetary donations, and anyone who wants to help or is just looking for a little more information should call 225-869-8148 or visit www.crazybouthistoryinc.org.

The $5 entrance fee will go toward the restoration and upkeep of the cemetery at St. Michael’s.

Also, in October Crazy ‘Bout History will once again be hosting a ladies social, this time at Bocage Plantation in Ascension Parish.

In the mean time, Donadieu can be found doing copious research or leading tour either through the French Quarter or along the river.

“If it’s for history, I’m not going to refuse,” she said.

So call her what you will — just remember that crazy is in the eye of the beholder.