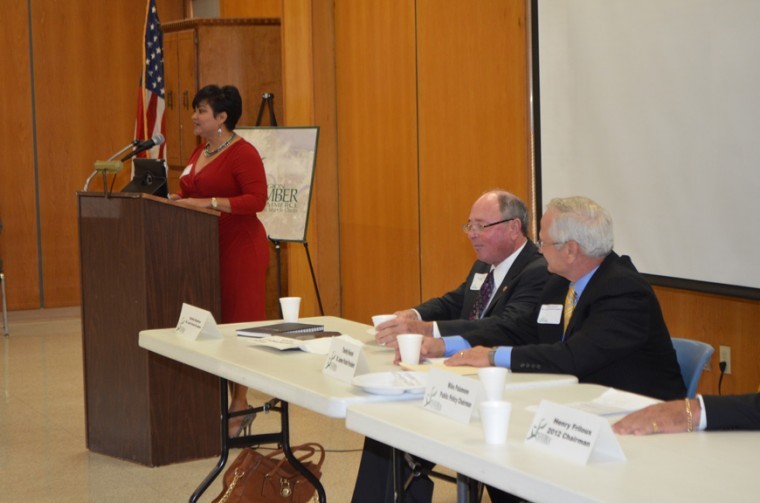 LUTCHER – The top government officials from all three River Parishes offered area business leaders status updates on development in the region during a breakfast forum in Lutcher Thursday.

Parish Presidents from St. John the Baptist, St. James and St. Charles parishes spoke positively about the direction of the parishes and the unique relationship each has with one another. The River Region Chamber of Commerce sponsors the annual forum, which rotates from parish to parish every year.

St. John Parish President Natalie Robottom started the meeting with a discussion on the parish’s commitment to economic development with a focus on business retention and expansion. She said the region currently has an unemployment rate below the national average, which is a positive sign for the future.

“It’s time to focus on helping the businesses of this region sustain success,” Robottom said. “Our region of parishes works together like no other region in the state.”

Robottom said St. John is working with South Central Louisiana Technical College to develop a resource center for job opportunities in the region. She also spoke about an increase in community involvement, especially with a newly elected council with lots of new faces.

“It will be the first term for six of the nine members, so it has been a learning experience for lots of them,” Robottom said. “Many of them have organized town halls and community meetings with constituents so that concerns can be heard.”

St. Charles Parish President V.J. St. Pierre discussed his parish’s recent completion of a comprehensive land use plan last year, something that St. John Parish also started working on earlier this year with a series of community input meetings. St. Pierre said a plan for the future of development is important but added that he was disappointed in the minimal amount of input from the public.

“We only had about 2 percent input,” St. Pierre said. “Everyone wants something done, but no one wants to participate in developing the road map to get it done. It is important to follow a plan once it is in place, but we need cooperation from the residents as well.”

St. Pierre also discussed other infrastructure improvements, including more than $490,000 in sewer projects, new levee top multi-use trails on both the east bank and west banks, culvert replacements on Ormond Drive in Destrehan, and a series of FEMA-funded projects to assemble screen cleaners at the parish’s pump stations.

“The screens scrape debris off the pump intakes so that it can be scooped off with a front loader,” St. Pierre said. “It keeps us from having to put an employee in danger.”

St, Pierre also discussed completion of a $6.5 million improvement to the Norco water treatment plant, which expanded its capacity to 13 million gallons per day. He also rattled off a list of new buildings in the parish, including a new emergency operations center, new drivers license office, new animal shelter and new clerk or court storage building.

St. James Parish President Timmy Roussel discussed improvements to the parish’s website in an effort to make it more user-friendly. He also talked about the parish’s expanded use of the social network Facebook as a communication tool.

“We want to showcase what we have in St. James Parish,” Roussel said. “We have done quite a bit to expand the lines of communication with residents.”

Roussel also addressed issues hindering the St. James Youth Detention Center. The facility is under new guidelines of operation from the state Department of Children and Family Services. He said legislation pertaining to the facility’s operation is progressing in Baton Rouge.