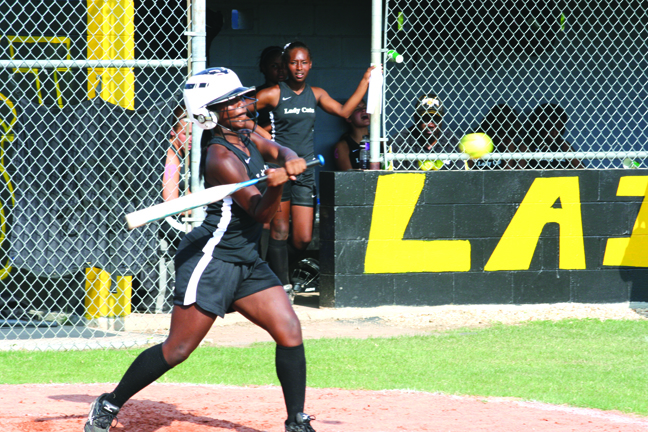 RESERVE — The East St. John Lady Wildcats struggled for much of a retooling season in 2012, but things began to come together over the season’s final week — the Ladycats, in fact, saved perhaps their best performance of the season for their last.

The Wildcats’ 10-0 win over Higgins was everything coach Monica Hebert could have asked for as a season-ending performance to build off of: the Wildcats jumped to an early lead, played an error-free game and saw pitcher Aleshia Murray twirl a no-hit shutout in five innings.

“We stayed consistent today and eliminated the mistakes,” Murray said. “It feels good to come out and play our best to finish things out.”

Said ESJ softball coach Monica Hebert, “This was a good win to end on. We’ve been hitting better and playing better defense, and we jumped on them early. This was probably our best defensive game of the season.”

Diranique Daniels capped the game in the fifth inning with a two-run double, netting ESJ its ninth and 10th runs of the day and closing the game by the 10-run rule.

“It’s exciting to go out with a bang,” Daniels said. “We hit the ball today, put it in play, and (Murray) gave us some nice pitching.”

She’s also get the Wildcats started, leading off the game with a single. Shaela Millet bunted her over and Kayla Bourgeois reached on an error, which brought Daniels home to make it 1-0.

Jessica Sanford drew a walk, then Murray drilled an RBI single to help her own cause. Ciera Eugene and Destiny Trosclair both drew walks, the latter forcing in a run to make it 3-0. Murray scored on a passed ball to make it 4-0 and Christen Webre grounded out but collected an RBI to push the lead to five.

ESJ added to the lead in the third inning, putting three more runs up on the scoreboard. Eugene singled and stole second, then with one out Webre was hit by a pitch. ESJ executed a double steal and Daniels singled in the Wildcats’ sixth run. Webre scored on a wild pitch to make it a seven-run advantage, then Millet socked a single to right to make it 8-0.

Murray continued to cruise, allowing just a single baserunner in the third and fourth innings. She finished with five walks and seven strikeouts.

ESJ finished things off in the final inning. Deja Monique, Dominique Brown and Vonkendra Jackson each drew walks to load the bases with no outs.

Daniels wasted no time in closing the deal, drilling a double into the gap in deep right and sending the Ladycats out with a win.

East St. John finished with wins in two of their last three games, including a 27-5 win over Bonnabel last week.

Kayla Bourgeois hit a two-run home run in the game. Daniels went 2-for-5 with a pair of RBIs. Webre started and earned the win on the mound.

Sandwiched between the two wins was a 13-7 loss to South Lafourche.

Eugene went 1-for-3 with two RBIs to lead ESJ.

The Ladycats finish the season with a record of 6-19, but went 4-5 in their final nine games, including four games of scoring 10 or more runs. ESJ finished 4-6 in District 8-5A, good for fourth place, and swept Higgins and Bonnabel.

“We really did come together over the past few weeks,” said Murray. “Despite all of the drama (of the season’s tough start), everyone decided to work together. And we started to put it together at the end.” 쇓