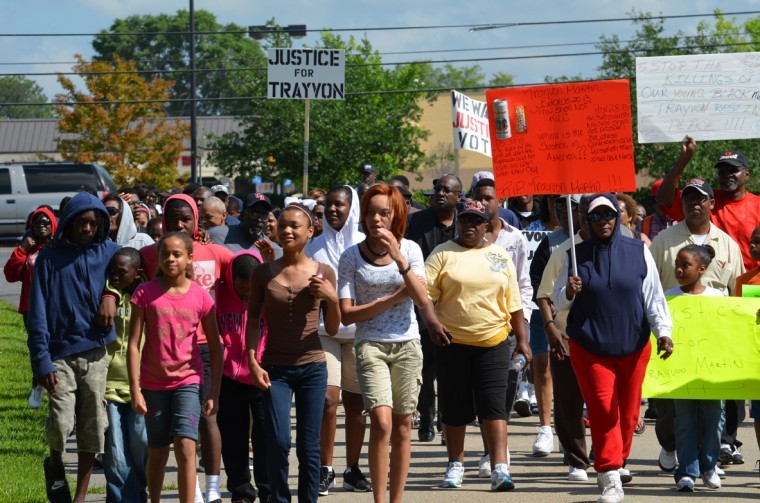 LAPLACE – It seems the tragic shooting death of the unarmed Trayvon Martin is on the collective minds of communities throughout the nation, and the River Parishes is no different.

On Saturday, Bethlehem Missionary Baptist Church and New Pilgrim Baptist Church held a march and rally in honor of the slain 17-year-old. The marchers, who gathered near East St. John Elementary School and followed a path similar to that of the annual Martin Luther King Day March up Airline Highway to the P.D. Hebert Building in LaPlace, had more than just the isolated killing of Martin on their minds. For them Martin had come to symbolize the unnecessary violence that has plagued the youth of the nation for years. Though spawned by violence, as the march progressed up Airline Highway, it was led by a truck blaring messages of peace and equality. It was a message the participants held close to their hearts.

“We are out here to hopefully stop our young kids from killing each other,” said participant Delbert Briggs. “We can’t do anything for Trayvon, but we can do something for the living. We’re just trying to stop this, and all we can do is start with our young kids.”

And there were many young people among the marchers Saturday, some wearing “hoodies,” the garment that has come to symbolize the unfair targeting and stereotyping of African-American youth.

“We’re seeing it all over the country,” said Briggs. “Lots of unarmed people are being shot. It’s just sad.”

Along with the marchers, a number of local officials, including St. John Parish President Natalie Robottom and local Rep. Randal Gaines, took part in the rally outside the P.D. Hebert Building. The rally included inspiring songs and speeches and prayers for the family of Martin and the community as a whole. More than just words wafting in the breeze, however, the rally also included a station where participants could register to vote in an attempt to make some real change happen.

“We have to vote like our lives depend on it, because they do,” said Rhonda Cammon. “It is so important, not just for Trayvon Martin but for our own children and grandchildren.