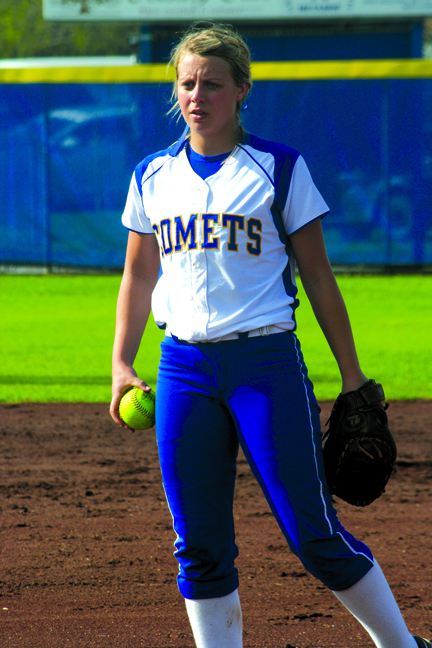 LAPLACE — St. Charles dropped two out of three games at last weekend’s Riverside tournament, but bounced back to capture a pair of dominating district wins this week over St. James.

The Comets defeated St. James in a doubleheader at SCC, winning both games 15-0 in three innings to run their record to 19-5 overall and 8-1 in district play.

The tone, however, was set for the Comets before the first game even began. Twelve-year-old Kassidy Terrio threw out the ceremonial first pitch of the day and was presented with a team jersey. Terrio is a cancer survivor who was diagnosed with Stage Four Neuroblastoma cancer in 2006. She is currently a patient at Memorial Sloan Kettering Cancer Center in New York.

Proceeds from all concessions sold at the doubleheader were donated to help cancer research. Terrio has three sisters, including a St. Charles graduate and two current SCC students; her sister, Karli, is the Comets’ starting second baseman.

“It was a great day. To win the two games, and to see the look on that girl’s face … it makes you realize that you take for granted what you have,” said St. Charles coach Ty Monica. “When you realize what that 12-year-old girl and her family have gone through, all of a sudden striking out with the bases loaded doesn’t seem like such a big deal.”

On the field, the runs explosion against St. James sets up a district-deciding game today at E.D. White. The Comets split with Brusly, winning 11-6 at home on March 13 but falling, 2-1, 16 days later on the road.

That leaves both teams at 8-1. SCC travels today to face E.D. White, a win clinching at least a split of the District 7-3A title.

“We really had no business winning that last game against them,” said Monica. “We didn’t swing the bats well or play very well defensively. We’ve got a lot to prove this time around.”

He pointed to that game as the start of what’s been an offensive slump for the Comets, one that dragged into the Riverside tourney last weekend. SCC defeated South Beauregard, 2-1, but fell to Mount Carmel, 2-1, and to Parkview Baptist, 7-1.

“For the first time I can remember, we’re in a slump at the plate that involves all nine girls,” said Monica. “Ever since we had that big weekend at the Lutcher tournament, we just haven’t been able to put those crooked numbers on the board. I think maybe a lot of it has to do with a combination of girls trying to do too much, and a lack of confidence right now.

“I just hope we can right the ship over the next few games.”

Against Mount Carmel, the teams went into the eighth inning in a scoreless tie, and decided the game under tiebreaker rules, with a player beginning on second base in each half of the inning.

Kacie Braud drove in a run for St. Charles, but Mount Carmel was able to push two across to earn the win.

Chelsea Loupe pitched all eight innings and allowed seven hits and walked one. She struck out five.

In the win over South Beauregard, Cori Millet and Emily Triche each singled and were bunted over by Kati Duhe in the sixth inning. With runners on second and third, Loupe hit a ground ball to second base to score Millet and tie the game. But an error allowed Triche to score the Comets’ second run and the eventual game-winner.

Loupe earned the win, tossing a two-hitter. She allowed one earned run and struck out nine while walking three.

Vandebilt Catholic jumped out to a 3-0 lead in the Comets’ third and final game and kept pushing to the eventual 7-1 final.