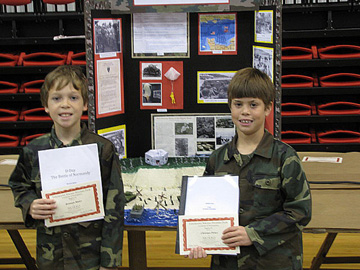 Mader and Prince reconstructed the battle scene at Omaha Beach in their project, “D-Day: The Battle of Normandy.” They draped plaster cloth over newspaper and cardboard to recreate the landscape and then added toy Army men and numerous handmade details. They constructed models of Higgins boats, formed barbed wire from picture-hanging wire and built beach obstacles for the display. Their backboard consisted of pictures, maps, a timeline and other historical information about D-Day.

The project placed first in the History category in Division I. More than 400 projects and 600 students participated in the regional fair.

The project continues a winning tradition for St. Joan of Arc social studies projects. Last year, students Alexis Keys and Kymberly Hillstrom won the regional and state fairs with their economics project, “The Cost of Vintage and Contemporary Barbie Dolls,” and displayed it at nationals in Washington.

Teachers tapped Mader and Prince to compete at regionals after their project placed first in St. Joan of Arc’s social studies fair.