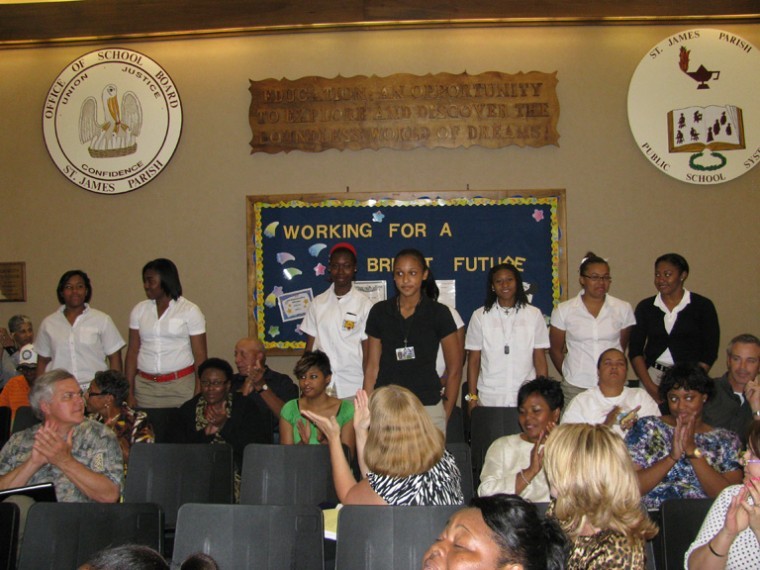 LUTCHER – Several members of the St. James Parish School Board expressed concern over the proposed education reforms currently being debated in the Louisiana Legislature.

Board Vice President George Nassar encouraged local residents, both those in the field of education and those outside the field, to contact area legislators with their opinions.

“It takes numbers,” he said.

Board member Patricia Schexnayder echoed his sentiments and expressed concern over the possible loss of tenure for many teachers.

“(The teachers) need to contact these legislators,” she said. “We can’t sweep this under the rug any more.”

Superintendent Alonzo Luce, however, noted that even if part of the legislation is stopped, some of it will make it through to the governor’s desk.

“Some of these we know are going to pass.  I think it’s very critical we understand them,” he said. “We have to be prepared to compete. This is a new paradigm.”

Much of the governor’s proposed education reform package concerns funding based on performance.

“We want to make sure that our kids from St. James Parish can compete throughout the state,” said Board President Charles Nailor.

Closer to home, the school board on Tuesday approved the readvertisement for bids on the site of the former Vacherie Primary School, which has merged with Vacherie Elementary School.

The district did, however, receive a number of bids on surplus vehicles, and the school board approved the sale of these vehicles to the highest respective bidders. The sale includes two buses, which each received bids of $1,288 from Jim Durham, a 1995 Ford F-150 Pickup, which received a bid a $850 from Anthony Joseph, and a 1998 Ford Crown Victoria, which received a bid of $1,533.

In other action Tuesday, the board agreed to accept as substantially complete additions to Gramercy Elementary School that will in large part be used for the Magnet Program starting there next school year.

The school board also approved a resolution honoring the St. James High School girls basketball team, which ended its season as state semifinalists.

“We had a remarkable season,” said head coach Gregory Wood.

Lastly, the meeting ended on a somewhat bittersweet note as the board bid farewell to Carolyn Weber, who has worked with the school board for the past 16 years, most recently serving as secretary. Weber announced her retirement earlier this year. She worked for the St. James Parish school district for 25 years.