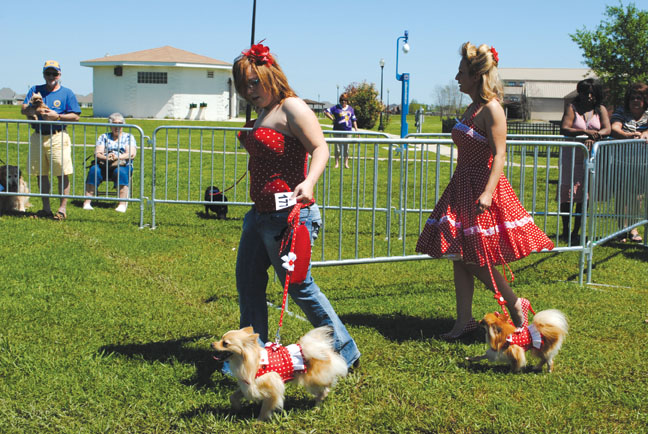 LAPLACE – Although phrases that contain the word “dog” often have a negative connotation — “gone to the dogs,” “the dog days of summer” or “in the dog house,” for example — for the scores of locals who turned out for Saturday’s fourth annual Pups in the Park fundraiser, dogs mean nothing but joy.

“Some people have come out every year,” said Bill Ironside, Rotary Club of LaPlace president and organizer of this year’s event. “It’s a big deal for them to come out and be around other dog lovers.”

As the Rotary Club of LaPlace’s biggest fundraiser of the year, the event annually raises thousands for dog-specific causes. This year, the money raised will go to purchasing vests for the canine halves of the K-9 teams of the St. John the Baptist Parish Sheriff’s Department. Accordingly, attendees this year were treated to a show put on by the K-9 unit.

“That was really one of the highlights of the day,” said Ironside. “I think it was really good PR for the Sheriff’s Department.”

With terrible weather plaguing most of last week, local dog owners seemed eager to come out to the event and spend some quality time with their four-legged friends.

“It was a great event. We had a great turnout,” said Ironside. “We raised more money than we did last year. You couldn’t have asked for better weather.”

Although there were fewer contests for dogs and their owners to enter this year, the ones that were held mostly had a large number of entrants. The contests this year were judged by St. John Parish President Natalie Robottom and St. John Sheriff-elect Mike Tregre.

Attendees also enjoyed food from Subway on Belle Terre Boulevard, this year’s food sponsor, and had the opportunity to visit booths from various local rescue organizations and animal shelters.

Ironside, however, recognized the most important aspect of the day.

He said, “I think that what’s really great about the whole thing is it’s really focused on St. John Parish.”