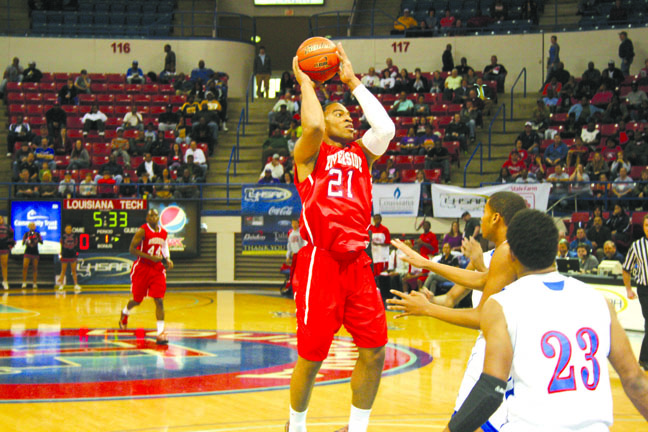 For Riverside’s Ricardo Gathers, his selection this week to the Louisiana Sports Writers Association’s Class 2A All-State team was the fourth time in four years that the big man earned the honor. For teammate Donald Thomas Jr., it marked the first time he’d receive that accolade.

Gathers averaged 21 points and 17 rebounds this season, the latest and final dominant prep campaign for the Baylor commitment. A go-to scorer, an anchor defensively and a magnet for rebounds, Gathers wore a lot of hats for the Rebels throughout his tenure and wore them well.

“Ricardo is one of the few people who can say that he’s accomplished virtually all there is to accomplish at this level,” said Riverside basketball coach Timmy Byrd. “He’s received all of the honors. There aren’t a lot of All-State players who can also say he’s got MVP awards and state championships … it’s all just indicative of the type of player he is.”

Gathers is a three-time MVP of the state championship game, was named Louisiana’s “Mr. Basketball” as a junior and is a two-time Class 2A MVP.

Thomas, meanwhile, averaged 14 points, eight rebounds and 4.3 steals a game. That statline is a strong example of the kind of all-around performer Thomas evolved into this season, stepping into the secondary scoring role vacated when standout guard Louis Dabney was lost for the season due to an ACL tear.

“He really came into his own from being a shooter to being an all-around performer,” said Byrd. “I thought he really had a breakout tournament at the City of the Palms. In January and February he took off and became a major stat-stuffer for us. He raised his game as we moved toward the playoffs.”

The 6-foot-7-inch swingman was primarily known as Riverside’s deadliest long range shooter this season and often hit 3-pointers in bundles.

Byrd said that the lack of one last title diminishes nothing for a special group.

“Because of the success they’ve had throughout, I think people need to take a step back and recognize how special this senior class really is,” said Byrd. “I think maybe it’s lent to people taking it for granted how difficult it is to win a state championship. And this group often made it look easy.”