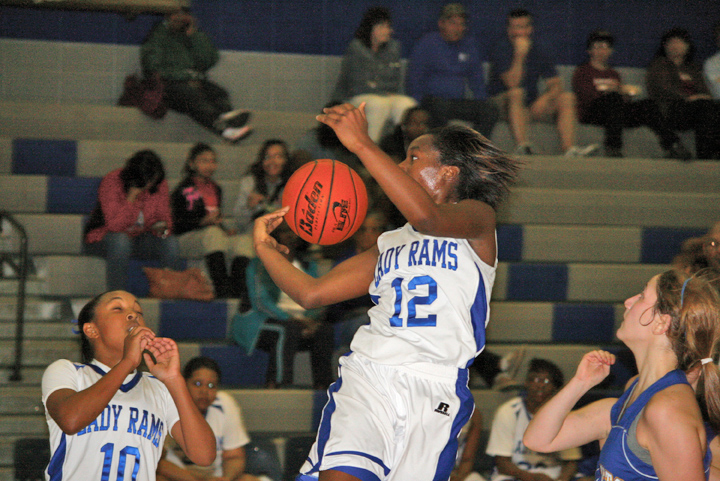 EDGARD – West St. John girls basketball star Jaylyn Gordon was the first All-State selection in her school’s history in 2011. This week, the Louisiana Sports Writers Association made her the Rams’ first-ever two time pick as she once again earned a spot on the team.

A 5-foot-4-inch combo guard, Gordon led the Rams to unprecedented heights this season. The junior scored 20.1 points per game as West St. John set a team record for wins in a season  (WSJ finished 26-5). It also finished undefeated in district play for the first time, capturing District 8-1A with a perfect 10-0 mark.

But where Gordon shined brightest turned out to be the state quarterfinals. Gordon hit six 3-pointers  in a 32-point outburst as the Rams went on the road to topple No. 1 seeded Central Catholic, 69-62, cementing the Rams’ first-ever trip to the Top 28 tournament. The Rams finally fell to Tensas and finished their season as a state semifinalist.

“She’s earned this,“ said West St. John coach Lester Smith. “She had a very good offseason workout program. She was running stadiums while we were at football practice. She knew that she had to get herself into great shape to be able to play in over 30 games.”

The 31 games the Rams played in were the most in school history, and she never seemed to drop off. Smith often speaks of the complete game Gordon possesses: she’s a great shooter, strong inside and can get into the lane at will. But Smith is quick to point out that in spite of the scoring numbers, its easy to see that Gordon is an extremely unselfish player as well, always setting up teammates when available, often at the expense of her own scoring opportunities.

Schools at the next level have noticed, as Smith said Gordon is drawing attention from schools like Tulane, UAB and McNeese State.

Smith said that her All-State-level success should be especially encouraging to younger students and children in the community.

“Other kids can see Jaylyn and see what she’s doing, and it’s going to make them want to work harder,” he said.