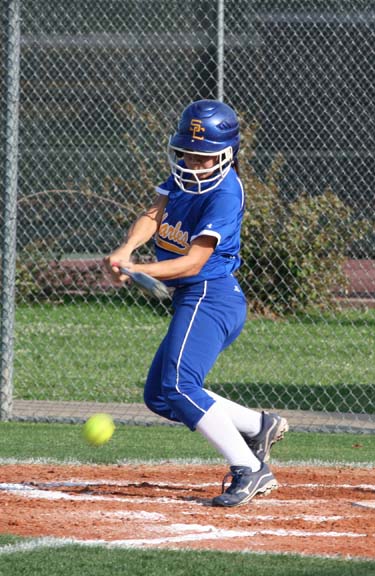 LUTCHER – St. Charles shortstop Emily Triche pulled into third, not yet realizing exactly what her shot to deep left field had accomplished.

It was, indeed, plenty. Her triple scored two runs and sent the Comets into celebration of a dramatic 2-1 victory over rival Riverside Friday in the Lutcher softball tournament. Riverside led the game all day after scoring on Katie Bailey’s first inning RBI double that scored Caitlin Roussel (running for Destin Vicknair, who singled).

“I had no idea (that the game was over),” said Triche, still wearing a big smile in the aftermath of her triple. “That there were two outs… I just wanted to keep it going.”

Said St. Charles coach Ty Monica, “I told them that I don’t know if they’ll sleep tonight, but I’m gonna pass out … With the stress of exams, add the win over Brusly and now this, it’s been a long, but successful, week.”

The game had the feel of a typical contest in Sulphur and it avenges the only loss of the season for the Lady Comets (11-1), who fell 8-2 to Riverside (12-3) at the Comets’ softball tournament.

“It’s a really good win for us for power points,” Triche said. “They’ve won a lot of games … They jumped out on us and we knew we had to fight back and get on top.”

But the Comets finally responded in their final chance to, the bottom of the seventh. With one out, Jessica Mire walked. Destiny Wesley laced a shot into center but it was caught by Taylor Terrio and SCC was down to its final out.

Kati Duhe extended the game though by punching a groundball just through the left side of the infield, allowing Triche to came up and take her shot. She vaulted one all the way to the fence to produce a walkoff victory for her team.

That inning came on the heels of a sixth inning where the Comets loaded the bases – Triche and Raven Becnel singled and Chelsea Loupe reached on an error – with one out. But Vicknair, who started and dominated most of the day on the hill for Riverside, was able to get out of the jam via a groundout and flyout.

“I‘d venture to say that they haven‘t been in that situation many times at all with (Vicknair) inside the circle,” said Monica. “You don’t get many base runners on her at all.”

The Rebels had a pair of chances, in the third and then the fifth innings, to extend their lead – both led by Kori Bourgeois. She led off the third with a single and Vicknair would walk with two outs, but Loupe got Bailey to ground out this time to end the jam. Then Bourgeois again started an inning off with a bang, smashing a double to deep left; Toni Hebert bunted her over to third, but the Comets held again.

Loupe had five strikeouts and allowed five hits in the win. She walked three and allowed just one run against an explosive Rebel lineup.

“It came down to playing good defense today,” Loupe said. “We did what we had to do to stay in the game. I just looked to throw strikes and we trust each other to make plays. After that, whatever happens, happens.”

Added Monica, “Whenever we play that team, it’s always a good game, always extremely competitive. And we always are gonna get better as a tea by playing them, win or lose.”