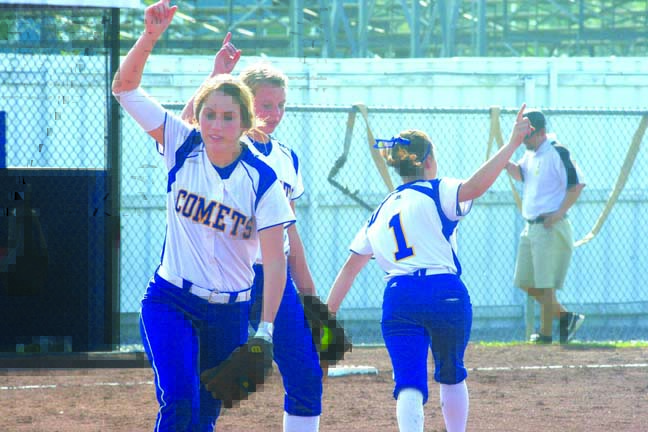 But Tuesday’s 11-6 District 7-3A victory over Brusly was indeed an eye-opener, both for the way it came and for the team it came against.

Indeed, Monica believed in his team before the game, which boasts a lineup he’s said that ranks among the best he’s ever coached.

But Brusly wasn’t supposed to be an offensive showcase by any stretch. The Panthers (12-4, 3-1) had only lost close games to top 3A contenders in Iowa, Parkview Baptist and Berwick; and the Berwick loss was avenged last week in an 11-1 Brusly win.

“We’ve been working hard and really coming together,” said St. Charles catcher Raven Becnel, who had a pair of key RBI hits. “We knew that this was a big game and that we had to rise to the occasion, and we did that today.”

After three innings on Tuesday, St. Charles had run out to a 10-2 lead on the Comets’ home field, well on its way to take sole possession of first place in the district standings.

“Never in my wildest dreams did I expect this,” said Monica. “Certainly not to score as many runs as we did. (Brusly) is a very, very good softball team.”

St. Charles (10-1, 3-0) got rolling in the second inning, starting with a walk drawn on a full count by Jessica Mire with one out. Mire stole second and third before Destiny Wesley drew a walk of her own. That brought the top of the order up. Kati Duhe brought home Mire on an infield RBI single when Mire just beat the tag by catcher Chloe Richard at home plate. Emily Triche popped out to pitcher Carli LeBlanc, but the Comets weren’t done.

Raven Becnel lined a single to center that brought home the day’s second run. Then Duhe scored on a wild pitch to make it 3-0. SCC starter Chelsea Loupe helped her own cause on the mound when she ripped a deep RBI double to the gap in left-center, making it 4-0. Finally, Heather Orillion capped the scoring with another infield RBI single to make it 5-0 after two innings.

“When Jess got on, it kind of jump-started us,” said Becnel. “It motivated us and let us know, ‘We can do this.’ We started hitting well from there.”

Brusly answered with a pair of runs in the top of the third. After singles by Claire Daigle and Akiya Thomas, Jada Cobbs knocked in a run on a fielder’s choice. Shelby Willis doubled down the third base line to place runners at second and third, then a wild pitch brought home Cobbs to make it 5-2 before Loupe struck out LeBlanc to end the inning.

Mire led off the third inning surge just as she led the second, with a full count walk. Wesley reached on a bunt single and Duhe walked to load the bases with no outs. Triche drew another walk to force home a run and make it 6-2.

That led to a pitching change for Brusly, as Christen Gaudet took the mound. But Becnel welcomed her by blasting a double to left field to score a pair of runs. Another run scored on an error to make it 9-2, and Orillion drove home the Comets’ 10th run on a ground out before Gaudet retired the final two batters.

Brusly had one last gasp in the fifth inning after a pair of defensive mistakes by SCC. Daigle reached on an error and Thomas laced a single up the middle. That led into another error on a ball hit by Cobbs; the throw to second base was wide and sailed into the outfield, allowing all three runners to score.

“I told my girls after we jumped out on them that this team, Brusly, can really swing the bat. They know it and I know it. And if we don’t keep hitting swinging the bats and playing solid defense, we’ll find ourselves in a war.”

St. Charles punched another run on the board in the bottom half of the inning. Triche led off with a single, then after Becnel advanced her on a groundout, Loupe smashed a double to left to make it 11-5.

“This is a game of momentum plays,” said Monica. “When we came back and Chelsea comes up with that timely double… even just that one run, I think we took the momentum back to a degree.”

Brusly scored once more in the seventh, but could not close the gap.

St. Charles has now scored 11 runs or more in all but two games and has outscored their competition 131-16. Fourteen of those runs allowed were scored over two games — eight against Riverside and the six on Tuesday.

Tuesday’s win, Monica said, was the biggest of the season thus far.

“It let me know that we’re able to compete against a team like Brusly at that level,” he said. “That opened my eyes.”