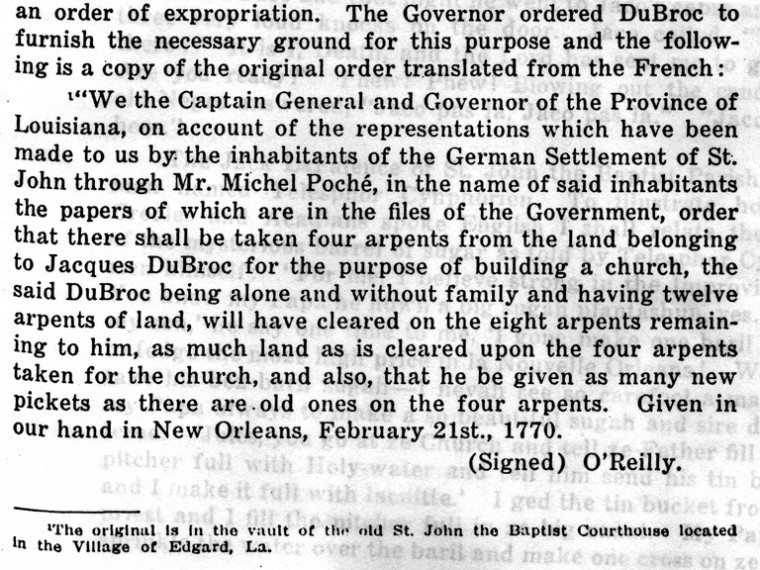 If you are Catholic and attend one of the many churches in St. John the Baptist Parish, have you ever thought about the very first Catholic church in the parish?

History shows that the planning for the first church was started in 1769. There was a problem in finding a location to build a church. A gentleman who lived in Edgard had 12 arpents of land. Your question now is probably what is an arpent of land? It is slightly smaller than one acre.

The gentleman, Mr. Jacques Dee Broc, lived alone and had no family. The community decided that he would be the best one to furnish a site for the church and cemetery. They sent Michel Poche’ with a petition to Gov. O’Reilly asking him to expropriate some of the property owned by Jacques Dee Broc so a church and cemetery could be built. The photo, is a copy of the original order translated from French and published in the History of St. John the Baptist Parish book.

The church would be erected on the property and would be built with hand cut cypress lumber. The church’s first recorded wedding took place in 1772. The marriage of Antoine Many and Sibylla Biechief was a joyous occasion in the church.

The church stood until 1821, when it was taken away by a flood. A new church was built of brick, and it stood for 100 years.

The parishioners attending the church that lived across the Mississippi River would cross on barges to attend mass. Then once again tragedy struck in 1918, when the church caught fire and burned to the ground. The people of St. John Parish raised $90,000 in one day to rebuild a new church. Fr. Mina took control of the finances, and a new church was once again built.

Mr. Lubin F. Laurent, 1889-1979, is responsible for recording the history of St. John the Baptist and kept records of the first churches. He also served as the superintendent of St. John the Parish Schools from 1917-1925.

So the next time you attend your place of worship, take a minute to stop and think about the history and how it first got started.