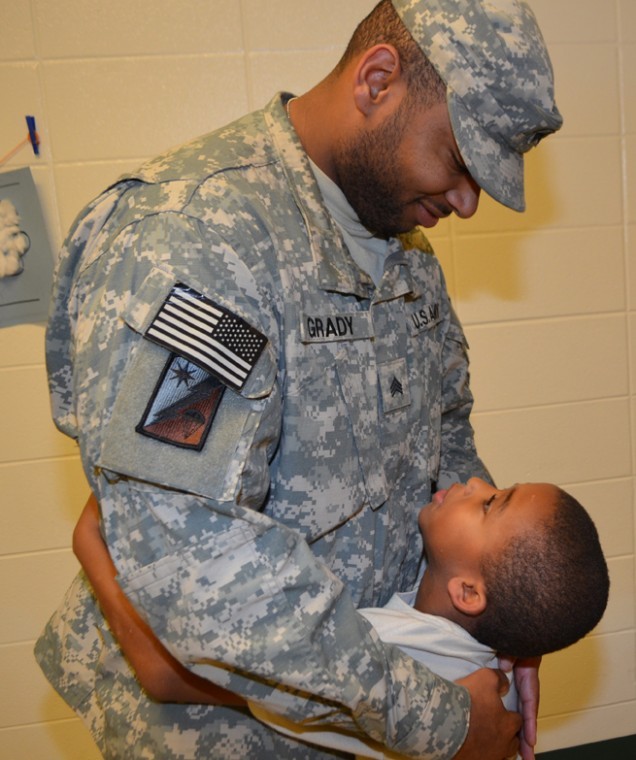 LAPLACE – The end of the week at Emily C. Watkins Elementary School is typically jubilant as students get the chance to celebrate five days of positive behavior with an afternoon dance party in the school’s hallways.

The celebration last Friday was extra special for 5-year-old Xavier Grady and his kindergarten classmates, as Xavier’s father, Army Sgt. Junious Grady, showed up at the school after being overseas in Kuwait for more than a year.

“He knew that his father was coming home, but he was not expecting him to come to school,” said Xavier’s teacher Lavondra McKinley. “He had been talking about it all day, and he even came to school in a special welcome home shirt. His dad wasn’t even aware he would be coming to see him at school until just this morning.”

Still dressed in his sandy camouflage fatigues, Sgt. Grady and his wife Amanda turned the corner from the school’s main corridor to the hallway where Xavier and his classmates were in a huddle with teachers. As Xavier caught sight of his father, he froze for a split second. His eyes lit up, a huge smile crossed his face, and he suddenly sprinted from one end the hall to the other crashing into his father’s waiting arms.

Once the reality of the moment set in, Xavier said he was looking forward to going home and spending time playing video games with his dad.

“We play bowling on the Wii, and we play games on his Xbox,” Xavier said. “I’m very surprised and so happy he is home.”

Sgt. Grady, 27, a native of Franklinton, said his trip home marks the end of a nine-year stint in the Army. For the past 12 months he has been stationed in Kuwait as a transportation coordinator shuttling soldiers and equipment across the Iraqi border.

“It was hard being away,” said Grady. “Since my last trip home, I’ve been gone almost two years. It is good to see something other than sand and desert and breathe normal air.”

Grady said he met his wife, a native of LaPlace, in College at Southeastern in Hammond. He said he fell in love with the community during repeated trips to the area to visit with his wife’s family. In addition to Xavier, the couple also has a one-year-old son Preston.

“We both sat Xavier down to explain why his daddy was going away,” Amanda Grady said. “We explained that he was going to the other side of the world and when it is daytime here it is nighttime over there. Even though he was gone, we still had the chance to talk to him almost every day either by phone or Facebook. It was nice to hear from him, but we are just so glad he is home!”