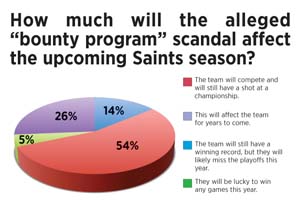 LAPLACE – The New Orleans Saints have been the talk of local and national sportswriters recently for all the wrong reasons as revelations of an alleged “pay for performance” bounty program among defensive players have come to light.

A lengthy report from the NFL accuses Saints players of pooling money together to use as cash payoffs for punishing defensive hits in games dating back to the 2009 season. Some level of punishment is imminent from the league and many NFL fans and media members have already pegged the Saints as a “dirty” team. With that in mind, visitors to L’Observateur’s website last week were asked how they expect the scandal to affect the upcoming season and many of those who responded believe the punishment and attention will not hurt the “Black and Gold.”

There are still some readers, however, about 25 percent, who think this scandal could have a lasting negative affect on the team for years to come and others who think the team will be lucky to win at all this year.

A complete breakdown is as follows:

• 14 percent of respondents said, “The team will still have a winning record, but they likely miss the playoffs this year.”

• 54 percent of respondents said, “The team will compete and will still have a shot at a championship.”

• 5 percent of respondents said, “The team will be lucky to win any games this year.”

• 26 percent of respondents said, “This will affect the team for years to come.”