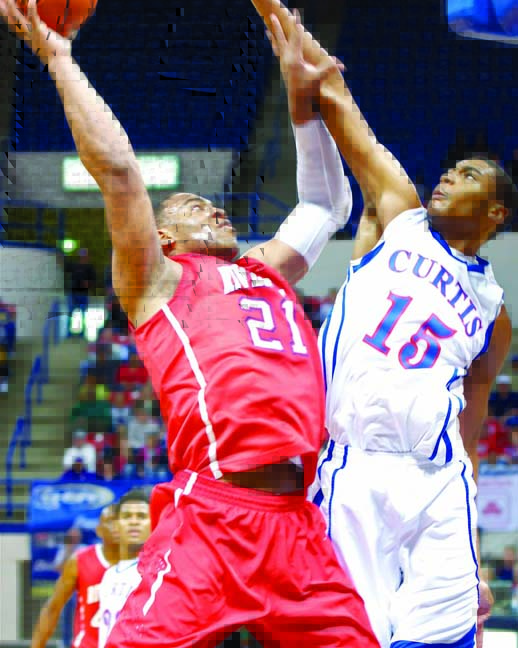 RUSTON — Through a quarter of play, it seemed like the final game of any other season for a Timmy Byrd-led championship contender. Riverside was rocking, rolling, and altogether frustrating a John Curtis bunch that had to be wondering if they were just the next in line to fall to the Rebels.

But when the final buzzer sounded, the scene was anything but common: Rebel players looking dazed and in disbelief, across the court from their elated counterparts. Riverside’s two-year reign as Class 2A state champion was over, Curtis walking away with a 57-48 victory in the Class 2A state championship game at Louisiana Tech’s Thomas Assembly Center.

It cemented the first boys basketball state championship for Curtis (28-2), a school that had collected numerous championships in other sports.

“Once we got to double zeros on the clock, reality set in,” said Curtis coach Michael Krajcer, who has coached the team for 16 years.

“All of the hard work that this team has put in, the trials and tribulations, it paid off.”

It was the first time one of Byrd’s teams had ever lost in the finals and it halted him from securing an eighth straight state championship and his 10th overall. Byrd captained teams at Reserve Christian to five straight titles before the school closed in 2009. Reserve won two more in 2002 and 2003; the Eagles were ineligible for the postseason in 2004.

The game was a close, physical, grinding affair that in no way resembled the scorefest between the teams on Feb. 10, a 105-93 Rebel win in which both teams shot extremely well from the field.

“We dictated tempo at the beginning,” said Byrd. “I thought Rico (Gathers) had his way, and the game seemed to come easy. After that, we took some ill-advised shots. Maybe because of that.

There’s no reason the game should have been in doubt after the first, the way we were playing, the way Rico was going. But we let them stay in it and the game became a grind.”

But most stressful to Byrd and his players was a 5-of-23 mark posted at the foul line; Curtis, by contrast, shot 20-39.

“When you shoot like that from the line, this is what happens,” said Byrd.

Ricardo Gathers scored 10 first quarter points and finished with 18 points and 14 rebounds in his final prep game. But he dealt with foul trouble throughout the fourth quarter and fouled out of the game with 1:54 left. Teammate and point guard Lucas Martin-Julien also fouled out with just under a minute to play. The Rebels were down four after each foul.

“I thought he picked up some cheap fouls,” said Byrd. “I thought that hindered him in the second half.”

Added Gathers, “As much as I tried to stay on the court, to stay out of foul trouble, I got into it … when you get to this point, it’s the team that makes the least mistakes that’s going to win. We made a lot of mistakes.”

Curtis took its first lead of the game late in the third quarter on a Banks’ layup, 35-34. Gathers answered and put RA back ahead on a putback, then Thomas scored in transition on a one-handed slam to make it 38-35.

But Curtis marched back. Patriots center Dillon Gordon, who finished with a team-high 13 points, scored inside to make it a 40-39 RA lead, then Malachi Dupre made two free throws to push Curtis ahead 41-40 with 5:03 remaining in the fourth quarter.

“Give credit to (Gordon)… he knew he could play against Ricardo Gathers. He showed no fear,” said Krajcer.

Martin-Julien shot back, converting on a slashing layup to put Riverside back ahead by one. But after a blocked shot, Curtis scored on a fast break when Durant leaked out for an easy layup to make it 43-42.

Riverside wouldn’t lead again. Durant got into the lane and dished to Gordon for another basket to make it 45-42. A free throw by Raekwon James made it 46-42. Von Julien drew Riverside within two by hitting on a floater with 2:10 left, but Gordon drew a foul and hit two free throws.

With 1:54 remaining, Gathers drew a foul but missed on two free throws. He tried to get his own rebound, but he was whistled for his fifth foul in the fray.

Morgan hit one of two free throws at the other end to make it 49-44. John Lewis scored on a putback to make it a one-possession game again, but Durant drew a foul and sank one of two at the line.

Smith missed on a 3-pointer at the other end and Thomas hauled in the offensive rebound, but was tied up, and Curtis got possession on a jump ball. Then a potential steal by Martin-Julien on a long pass was negated when he was whistled for his fifth and final foul. That was essentially the last gasp for the Rebels, who wouldn’t score again until the final seconds.

Dupre finished with nine points and 14 rebounds for Curtis. The Patriots outscored Riverside 21-10 in the final quarter.

Riverside led 25-14 at one point in the first half, but baskets by Morgan and James and a half-ending three by Durant helped fuel a 10-2 run to end the second quarter.

The Rebels led 33-24 early in the second half after a quick trio of buckets, the last a slam by Gathers. But Curtis quickly went on a 7-0 run to pull within two.

The Rebel seniors will leave a legacy of historic success behind them at Riverside, comprising a group that secured not only the first state championships in school history, but also its first district crowns and Top 28 appearances.

“This is one of the best team’s I’ve coached,” said Byrd. “Is it the best?

That depends on who you talk to. But it’s a special group to me.

“It just hurts to not see them go out on top. But I couldn’t be more proud of these guys. This loss doesn’t take away from who they are and what they’ve accomplished.”耀