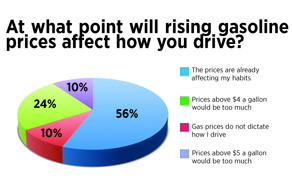 LAPLACE – With the continuing tension in the Middle East, coupled with some malfunctions and breakdowns in refineries across the United States, gasoline prices have been on a steady increase since the start of 2012.

At most stations in the River Parishes region, prices have shot above $3.50 per gallon with no signs of relief. The pain at the pump seems to be affecting many drivers’ habits in the River Region.

According to results from last week’s L’Observateur online poll, more than 50 percent of those who responded said the rising price of gas is already affecting how they drive. Another 24 percent of those who participated said prices would have to climb above $4 per gallon before driving habits change. Even fewer would be willing to wait until the $5 per gallon mark to alter driving habits.

A complete breakdown is as follows:

• 56 percent of respondents chose “The prices are already affecting my habits.”

• 10 percent of respondents chose “Gas prices do not dictate how I drive.”

• 24 percent of respondents chose “Prices above $4 a gallon would be too much.”

• 10 percent of respondents chose “Prices above $5 a gallon would be too much.”