LaPlace pilot shares knowledge of the skies in book 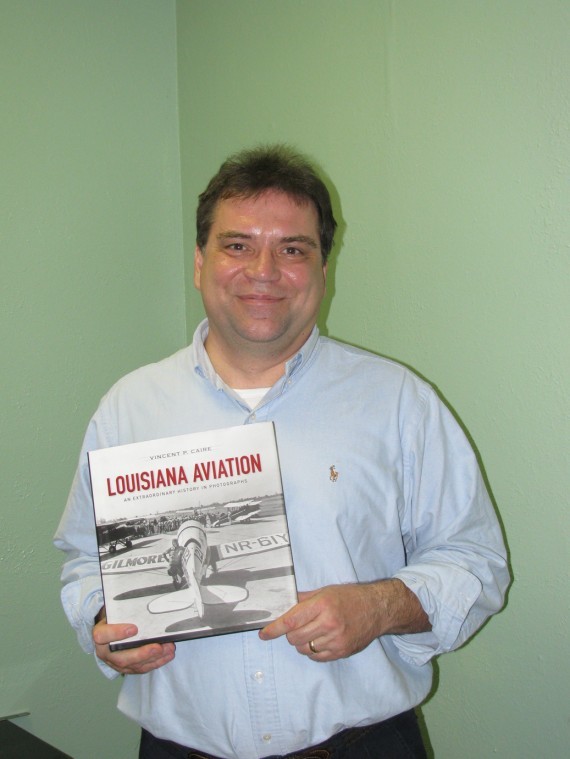 LAPLACE – LaPlace resident Vincent Caire has been fascinated with aviation since he was a little boy listening to his father’s stories the heroics of airmen during wartime.

“My dad was a naval aviator in World War II,” said Caire, “and that’s where it all started. His flying stories really got me going.”

Since that time, Caire has expanded his knowledge of local aviation to become somewhat of an expert on the matter. Now, he is sharing that knowledge with the world with the publication of “Louisiana Aviation,” due out from LSU Press in April.

Although the book’s subtitle is “An Extraordinary History in Photographs,” the book is much more than a coffee-table volume to be flipped through at leisure and eventually forgotten. Its pages contain detailed texts highlighting Lousiana’s past 100 years as a leader in aviation.

“It’s published by LSU, so I had to make sure my research was correct,” said Caire, who worked on the book for about three years.

Caire said many now-national airlines got their start in Louisiana.

“Delta Airlines was founded and started in Monroe, La.,” he said. “The Wedell Williams Air Service, based in Morgan City, merged and became a significant part of Eastern Airlines.”

He added, “Today’s American Airlines was originally known as American Airways, and in the 1930s it had an airmail route between New Orleans and Chicago that was one of the most profitable in the country.”

Caire also dedicated a chapter to an airport many consider the crown jewel regarding Louisiana aviation, Shushan Airport or what is more commonly referred to as the New Orleans Lakefront Airport.

“It was the first modern art deco airport to open and operate in the U.S.,” he said.

The book, however, is more than an exploration of the state’s past flights; it also spends some time looking to the future.

“One of the sections in the book is about general and business aviation,” said Caire. “We’re a parish lucky enough to have an airport, and it can be a real economic benefit. It’s a facility with a world of potential.”

“Louisana Aviation” is not Caire’s first foray into writing. Caire said he really got into writing in 1994 and has since published numerous magazine articles. He also wrote and produced a documentary for public television called “Sky Riders: Louisiana’a Aviation Pioneers.”

Caire is also a licensed pilot himself, although he said supporting his family has trumped joyriding in airplanes lately.

“Louisiana Aviation” comes out April 2 and will be available at most major booksellers and online.