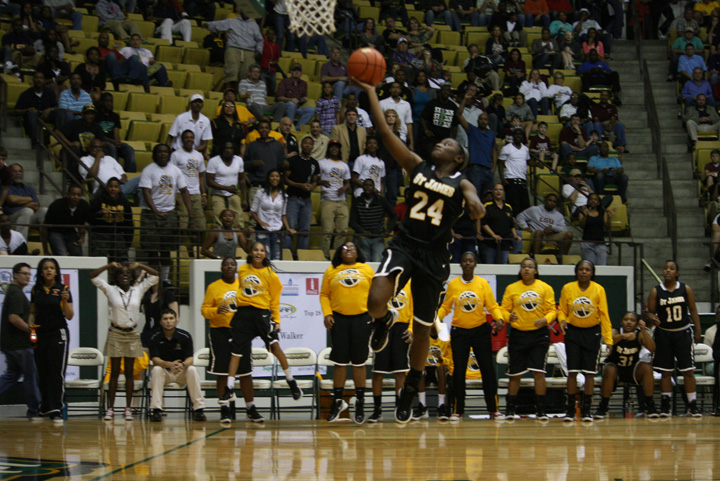 This season, only one — Adams, or the Ladycats — could advance to that final game. And four quarters weren’t enough to decide between them.

Albany will face Loyola Prep in the state championship game in Ruston this week.

“That was one of the most exciting and emotional games I’ve been a part of as a coach,” said Adams, who left St. James after a season to move and coach closer to his home. “I don’t know that we won the game. We were just the team that happened to be ahead when time finally ran out.”

Forward Danielle Keith led Albany with a monstrous performance, scoring 22 points and grabbing 24 rebounds in 40 minutes of action. Eight of those boards were at the offensive end.

“Coach told me that I had to take over the game. And I don’t like to do that usually,” said Keith. “I usually leave that up to someone else. I just prayed … and when I got the chance, I did it. We wanted this and we took it.”

Both teams dealt with serious foul trouble throughout the game. Albany was hamstrung when standout point guard Shelby Stewart committed four fouls in the opening quarter. She was limited to just 23 minutes and three points.

“That was my fault,” said Adams. “But to pull us back into it was a major team effort.”

Meanwhile, Tucker and Kaitlin Bartholomew each played much of the second half with four fouls, and each eventually fouled out.

“We felt we needed to continue to pressure them throughout. We’re a full-court team,” said St. James coach Greg Wood. “We got a little sloppy and started reaching a bit … we kept trying to make plays, but we got into foul trouble.”

St. James had a chance to seal the win in regulation after a thrilling fourth quarter rally that saw the Lady Wildcats erase a nine-point deficit. With four seconds left and the game tied at 51, Jonquell Jackson drove baseline and put up a shot just outside the lane that danced tantalizingly on the rim before falling off.

“I just knew that shot was going in,” said Adams. “When it didn’t, I thought that maybe things were turning for us.”

The Wildcats took control of the first overtime in the early stages, Jackson converting a layup off of a steal and Tucker driving for a score to make it 55-51. But with 1:09 left and Albany down three, Amanda Fernandez canned a 3-pointer from the corner to tie the game.

“That was the biggest shot of the night for us,” said Adams. With 19.3 seconds left, Tucker fouled Thompson and put her on the line; it was Tucker’s fifth foul and she would have to leave the game. Thompson sank two free throws. But St. James forced a second overtime when Jackson drove for a score and converted a layup with time winding down.

Keith took over the second overtime. She began by sinking two free throws before Adams tied the game with a layup. She put Albany back ahead via a putback, then made another after a SJH traveling violation to make it 63-59.

“We had a lot of trouble with her,” said Wood. “She really hurt us inside.”

Braxton sank one of two free throws to make it a one-possession game late, but Stewart matched that effort with 8.9 seconds left to all but seal the win.

Wood said that he was proud of his team’s accomplishments this season, noting that after the graduation of a stellar senior class a season ago — led by current Nebraska standout Brandi Jeffery — another run to the Top 28 wasn’t predicted by many.

“This is only the second team in St. James history to make it to the Top 28,” said Wood. “Our goal all year was to get back. Our girls wanted to show they were as good, and they had something to prove. We started talking about it back in August. These girls did an outstanding job.”쇓