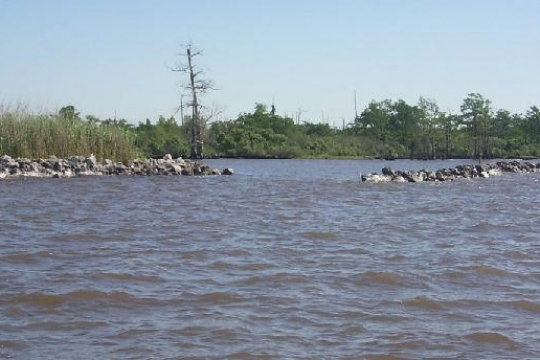 LAPLACE – The U.S. Army Corps of Engineers will begin work this month to reinforce protection to a five-mile stretch of the western Lake Pontchartrain shoreline near the Manchac Wildlife Protection Area.

The corps’ New Orleans office recently awarded a $16 million contract to an Illinois-based firm to make improvements to a group of segmented breakwaters that protect the shoreline from further erosion, said Corps of Engineers spokesman Rene Poche.

“The project is part of the corps’ mitigation for damage to the wetlands in that area from the construction of levees in St. Charles, Orleans, Jefferson, and St. Bernard parishes prior to Hurricane Katrina,” Poche said. “The project will help keep the land bridge between Lake Pontchartrain and Lake Maurepas in tact.”

Poche said the segmented breakwaters were built in 1994 and run the entire five-mile stretch of shoreline protecting the wildlife area and other parts of the shore. He said the new contract, awarded to Luhr Brothers last week, will create a continuous 25-foot-wide rock dike that will be raised three feet above sea level and positioned about 75 feet from the existing shoreline in some locations.

“Once the rock dike is complete, the contractors will pump dredged material from the bottom of Lake Pontchartrain into the area between the rock dike and the shoreline that will ultimately jumpstart development of 110 acres of marsh,” Poche said. “The dredging will cause no expected impact to the lake’s water quality in that area.”

In addition to reducing further erosion of the land bridge between the lakes, the project is also expected to reduce saltwater intrusion into a large freshwater pond within the Manchac Wildlife Protection area known as “the Prairie,” a habitat frequented by ducks.

“Settlement of the breakwaters as well as scouring between the segmented structures has allowed salty lake water to infiltrate the brackish marsh surrounding the Prairie,” Poche said. “It’s a valuable element of the protection area.”

Poche said the notice to proceed with the project will be issued March 23. He said construction will be completed in summer 2013.