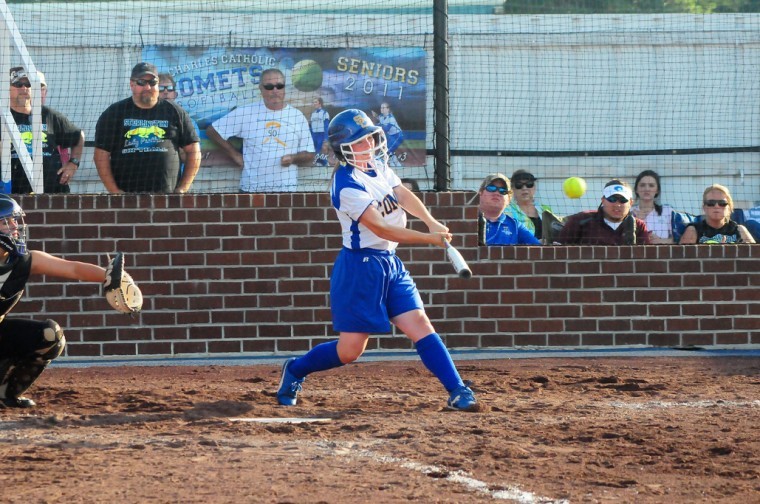 LAPLACE — Save for a loss to Riverside at its Comet Classic tournament last week, St. Charles Catholic has been dominant on the softball field this season. It continued that run this week, with decisive wins over Hannan, 7-1, and Doyle, 11-0.

The Comets toppled Hannan (3-2), the defending Class 1A state champions, on Wednesday behind a strong effort by Loupe and a pair of big innings.

Heather Orillion went 2-for-3, with one of her hits a three-run home run in the third inning that broke a scoreless tie.

“We started the game kind of sloppy. We allowed a double on a play I thought should have been made, then we made an error and they scored,” said St. Charles coach Ty Monica. “The first three innings at the plate, we looked bad, getting jammed. Then Chelsea singled, and Heather comes up and hits a three-run homer. And we played so much better after that.”

Destiny Wesley went 2-for-3 with two RBIs. Loupe was 3-for-3 and Raven Becnel and Kati Duhe each collected two hits.

Loupe allowed one run on six hits while walking one in her complete game effort.

SCC scored four runs in the fifth inning to all but slam the door on the Hawks.

“It’s a good win for us because Hannan’s a really good softball team,” said Monica. “They’ll win 20 games this year.”

Thursday, SCC traveled to Doyle (1-4), where the Comets scored in all but one inning. St. Charles scored six runs in the fifth inning to end the game on the 10-run rule.

Loupe allowed no hits and walked no batters; Doyle’s lone baserunner reached on an error. She struck out 10 batters in a complete game effort.

“It didn’t hurt our chances that Chelsea dominated inside the circle,” said Monica.

Orillion went 2-for-4 with two RBIs for SCC (6-1). Wesley also had two RBIs. Loupe went 3-for-4 with an RBI. Becnel and Kacie Braud each had two hits and an RBI.

A season after the Comets broke the school record for home runs in a single season, they’re off to another tremendous offensive start: SCC has scored 67 runs in seven games.

“This is, no question about it, one of the better hitting clubs I’ve had,” said Monica. “I don’t think swinging the bats will be an issue … but for us, it comes down to whether we’re mature enough to handle certain (clutch) situations that come up. I’m not sure I can answer that yet.”ꆱ