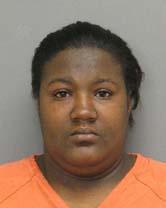 HAHVILLE – Sheriff’s deputies in St. Charles Parish arrested a Killona woman Friday after she punched and stabbed her ex-boyfriend during an argument that morning.

Deniscia M. Butler, 23, of 145 Adams St., Killona, was booked into the Nelson Coleman Correctional Facility on attempted second-degree murder charges, said Capt. Pat Yoes, spokesman for the Sheriff’s Office. Butler is being held on a $100,000 bond.

Yoes said Butler and the unidentified victim, who is also the father of her child, were involved in an argument at the victim’s home around 3:45 a.m. Friday.

Yoes said the argument became physical, and Butler allegedly began punching the victim several times. Authorities said Butler then grabbed a knife and stabbed her ex-boyfriend in the leg and stomach. Investigators do not know what sparked the fight.

Yoes said the victim was taken to St. Charles Hospital for treatment and placed in the intensive care unit for observation.

His condition is not known. Butler turned herself in at the jail just before 9 a.m. Friday.