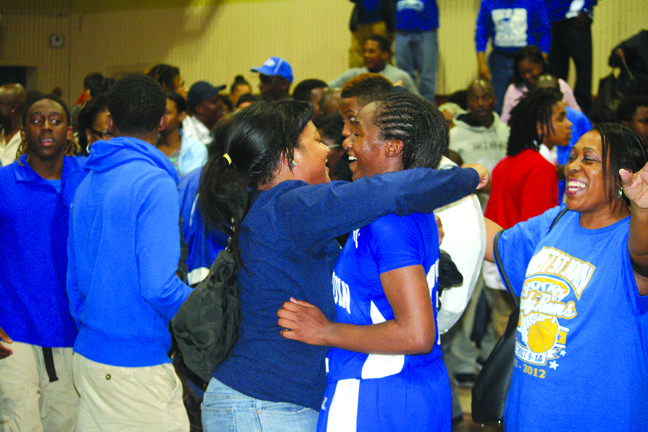 Hammond represents the next stop for West St. John, as it advanced to the Class 1A state semifinals Monday night after pulling off what has to be considered the greatest win in school history, downing top-seed and host Central Catholic, 69-62, in a quarterfinal game.

The eighth-seeded Rams will face No. 5 Tensas in the state semifinals at Southeastern.

“There’s no way to explain how I’m feeling right now,” said Rams forward Harley Morris, who finished with six points. “It’s a marvelous feeling. To beat the number one team here … knowing the way our team has worked together, helped one another all season … it’s a wonderful experience.”

It was played inside of a packed Central Catholic gym, one that was divided almost down the middle with Eagles and Rams fans that made the hour-plus long trip from Edgard. And both sides were feisty until the final buzzer.

“You just feel great for these kids. They continue to make history here,” said West St. John coach Lester Smith. “They’ve had this goal in mind all season and worked so hard to get here. And now they’ll the first team to play at the Top 28.”

Jaylyn Gordon’s 32 points led the way, that total including six 3-point buckets by the junior. Five of those came in the first half. Maya Trench scored 15 and Deja Feist scored eight.

“It’s what we’ve worked every day for,” said Gordon. “It feels great to know where we’re going next.”

For the Eagles, Meo Knight scored 27 and Randi Brown added 19.

Trench and the Eagles’ Makoyla McDonald each scored baskets to begin the fourth quarter. Gordon drove and finished off of a hop step to make it 55-51. Knight cut the Rams’ lead to four by hitting a free throw, but it was the last points Central Catholic would score for almost four minutes.

Central Catholic (23-4) had made their living underneath the basket, using their size as an advantage on the interior. But the Rams adjusted to what the Eagles were doing well – a 1 for 20 shooting effort from behind the three-point line gave the Rams a chance to overplay the inside.

“We realized that we needed to start playing the drive and make them shoot the three,” said Gordon.

Said Central Catholic assistant coach Joe Jones, “We really struggled from 3-point range. We’re usually a balanced team, we hit five or six a game from the outside, We only hit one. We shot 13 of 29 from the foul line … West St. John played a very good game. I’ve seen them play a couple of times before, and this was the best they’ve looked. We couldn’t get into a good rhythm, but give them the credit.”

Gordon extended the lead to five, 57-52, after putting back an offensive rebound. Then JaJuan Nicholas got a rebound and pushed the ball up the floor and all the way to the basket, drawing a foul and muscling up a shot in the lane that went to make it 59-52. Her free throw made it an eight point game. Harley Morris pushed the lead to 10, 62-52, when she finished underneath.

Central Catholic pushed back with 2:27 left, Knight scoring and drawing a foul for a three point play to make it 62-55. Nineteen seconds later, Brown hit one of two free throws to make it a six point game.

Gordon looked to finish it off, driving and converting a layup to push it back to 64-56.

The junior guard scored 15 second half points, opting to attack the basket more than firing the three-ball.

Knight scored again, then hit a pair of free throws to make it 64-60.

The Rams struggled from the line as the game wound down, mi8ssing six of nine free throws, including the front end of two one-and-ones.

Each team missed a 3-pointer in the final minute. Central Catholic could not find a clean shot in the last 30 seconds, and after a Rams’ stop, Gordon drew a foul and sank two free throws with 11.4 seconds left.

Brown was fouled shooting a 3 with seven seconds left and made two of three at the line. At the other end, Trench made one of two free throws, then came up with a steal with 4.1 seconds left to ice the win – and to start the celebration.

Central Catholic trailed 41-34 early in the second half, but Central Catholic climbed back in it behind a 10-2 run powered by Knight, who scored eight in that stretch. The Eagles led 44-43 after a Knight drive and layup, but WSJ jumped ahead again 49-44 after buckets by Trench, Gordon and Feist.

WSJ led 51-46 before Knight capped the third with a reverse layup and a foul shot.

“We told them at halftime that this team would have their moment and push back,” said Smith. “We knew it would be a dogfight.”

The Rams have now won 19 straight games. Two more would make what once seemed like an impossible dream three years ago – when the Rams had never won even a playoff game – a reality: a state championship.

Gordon admitted excitement over the prospect, but said that for it to happen, wins 20 and 21 will have to come the same way that one through 19 did.

“We have to keep playing the same game,” said Gordon, surrounded by supporters and with a broad smile on her face.