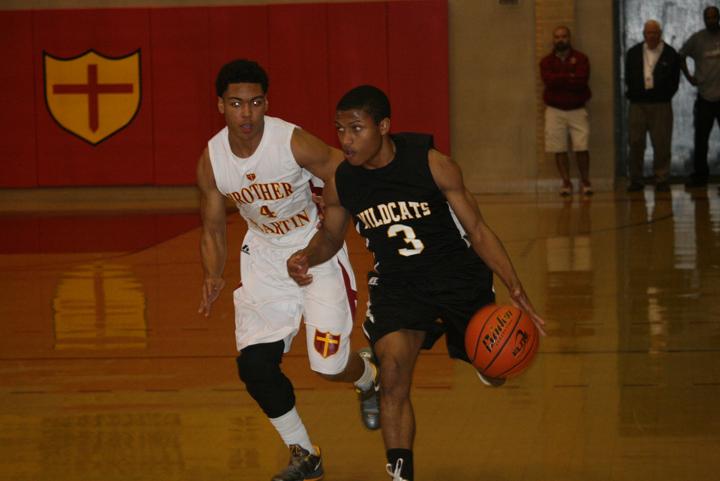 NEW ORLEANS – A battle between two surging teams ensued, one a relative upstart finding its place among the state’s elite, another a traditional power.

Tradition won out this time around, as Brother Martin held off East St. John to win a back-and-forth Class 5A regional round contest, 54-51, and pull off its second consecutive postseason upset.

The No. 21-seeded Crusaders hosted the game after knocking off No. 13 seed Zachary in the opening round., 57-53. ESJ was seeded fifth.

Brother Martin (21-11) has qualified for the postseason for 12 straight years – the longest current streak in Class 5A.

In East St. John’s opening round game against John Ehret, the Wildcats (24-7) forced the Patriots into 22 turnovers en route to a win. This time, it was the Wildcats that couldn’t overcome its own errors, turning it over 22 times against Brother Martin’s defense.

“We knew it would come down to defense,” said Brother Martin’s Jabaar Singleton. “We stayed calm but maintained the intensity we needed to. We knew that we had to make a big charge in the second half of the season, and everyone has been here every say ready to make it happen.”

Singleton, who scored a team high 15 points, missed an early season matchup between the teams, one that the Wildcats won by a landslide 67-37 margin at ESJ.

“They had their point guard back, and he’s a good leader,” said Jasmine. “And this is a very tough environment to play in … What it came down to though is that we missed too many easy baskets, too many free throws, and had too many turnovers to overcome. We had to fight to keep it close in spite of all that, but when you play a good team like this in their house, especially, it hurts you. You have to give it to Brother Martin for doing a good job tonight.”

With under a minute to go, Martin led by five when Joseph Williams gave East St. John a chance, scoring and creating a 3-point play after a foul to make it 51-49. The Crusaders’ Jordan Cornish missed two free throws at the other end, opening the door for East St. John with 33.9 seconds remaining.

But Williams’ shot to tie at the other end wouldn’t fall, Cornish extended the lead to four with a pair of free throws, but an immediate holding foul on the inbounds pass let East St. John score with no time elapsed and 18.2 seconds left. Gray was fouled and made one of two to make it 54-51; ESJ went for a deuce on a Patrick Washington drive, but his layup attempt rimmed out with 6.6 seconds left.

Martin’s John West missed a pair of free throws, but Williams’ three-quarter court heave to tie came up empty. Neither team led by more than six in the game. East St. John led 25-22 in the third quarter after a turnaround jumper by Elex Carter, but Brother Martin quickly fired back to take the lead, a Jabbar Singleton corner 3 igniting what would ultimately be the most pivotal sequence of the game. Jalen Gray scored on a leakout to put Martin ahead 27-25, then Singleton did the same following a ESJ turnover. Another Crusader steal led to yet another open basket in transition, this one an emphatic Denzel Flemings dunk off of a steal. Flemings’ bucket capped a 9-0 run and put Martin ahead 31-25.

Gallagher said that the stretch was made possible by a defensive switch to zone that momentarily tripped up the Wildcats.

“When we switched to the 2-3, it kind of took them out of what they wanted to do,” he said.

Said Jasmine, “It stopped us from penetrating and kind of tricked us a little. They mixed up a 1-3-1 with the 2-3. It made a big difference.”

East St. John wouldn’t go away, though. Emmanuel Victor hit a 3-pointer to end the run and cut the lead in half. A Joseph Williams’ 3 made it 33-31 in Martin’s favor. The Crusaders led 37-33 at the end of the third after another 3, this one by Gray. East St. John charged back to take a 38-37 lead early in the fourth quarter after a pair of free throws by Washington and then a basket-and-one by Chester Victor. Gray tied things up with a free throw, then Singleton gave Martin the lead again with a pretty, contorting layup. Williams tied the game again after drawing a foul and making two free throws, but Singleton did the same at the other end – Martin led 42-40 and wouldn’t trail or fall into a tie again. The Crusaders led 44-40 when a putback by Rashad Green cut the lead in half; Flemings’ basket and foul shot at the other end was answered by a Chester Victor 3 from the wing to leave the Crusaders ahead by just two, 47-45.

Singleton led Martin with 15. Fleming scored 12 and Gray nine. For the Wildcats, Williams also scored 15 to lead his team. Emmaniel Victor scored eight. The loss ends a record breaking season for East St. John, one in which the team found a steady place within the Class 5A top 10 poll and set a record for wins in a season with 24.