The voices of the forgotten 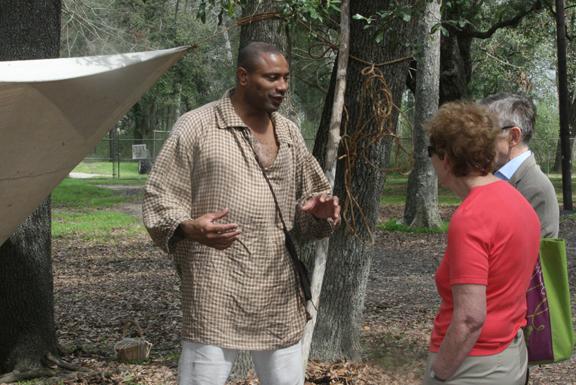 DESTREHAN — Dianne Honore’ and Ronald Schumann wanted to write a historical account of cultures that intrigued them: the German-Acadians, the enslaved Africans, the Creole free people of color and the Native Americans of the first 100 years of the German Coast.

And they wanted it to be accurate.

Thus, the “Unheard Voices of the German Coast” was born.

The specialized tour is available on Thursday and Saturday of each week at Destrehan Plantation, where the two writers are staff members. The 90-minute tour takes place at 10 a.m. and 1 p.m. on those days and takes the visitor on a journey to see the beauty of the plantation and to “speak to its residents” from the past, as the tour guides get into character and dress for the part.

The name of the tour refers to the “unheard voices” of other plantation tours, voices hushed due to subject matter Honore’ said is generally considered taboo and left alone on those routes.

“People get skittish when you delve into things like slave beatings and voodoo and things of that nature, for example. But it’s important to make the distinction between the version of voodoo culture that Hollywood displays and what voodoo really is,” Honore’, who also acts as a tour guide, said.

Aside from the tour guide, there are people on the different tour stops that represent those from the past. Tour goers are free to chat with and pick the brain of each for what becomes a truly educational experience.

Different rooms carry different themes. On one stop, one learns about the music of the plantation workers, and its significance.

“I wish this segment would last an hour,” said Honore’.

A stop into the kitchen yields information about the plantation’s domestic workers, how food was prepared and what was expected of the workers.

On an excursion into the dining room, a story is shared about how one laundress was able to “buy” her freedom; also detailed was the process behind it. A walk outside to the “maroon village” allows one speak to a runaway slave, who reveals that he and many others chose to make his home by the swamps, with the alligators and snakes.

“You just hope you eat them before they eat you,” he said.

The final stop brings one to an exhibit that details the slave revolt of 1811, including the events that led up to it and its fallout.

Through it all, the audience is immersed into the experience, and the story of these cultures — there are multiple tour guides, and each group is small enough to lend to strong audience interaction with the guide and the tour workers.