Gas prices will rise through weekend 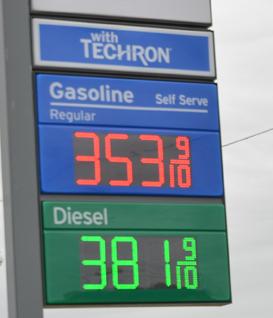 LAPLACE – Motorists needing to fill up on gasoline should do it as soon as possible this weekend as fuel prices are expected to jump sharply in the coming days, according to pricing analysts.

Greg Laskoski, an analyst for GasBuddy.com, said a refinery fire in Washington coupled with refinery closures in Pennsylvania is causing a chain reaction that is affecting demand across the country and forcing gas prices to jump as much as 45 cents per gallon in some parts of the country.

“It’s forcing suppliers on both the east coast and west coast to seek refinery capacity in other areas,” Laskoski said. “Residents in Louisiana won’t feel the pinch as bad as other areas, but there will be an increase in the next few days.”

Laskoski said gas prices in the New Orleans metro area are expected to increase anywhere between 5 and 10 cents per gallon at some stations by the end of the weekend.

According to fuel figures from AAA Friday, the average price of regular unleaded gasoline in the New Orleans metro area, which includes the River Parishes, is about $3.53 per gallon, which is 2 cents more than the Thursday average. A month ago, gas prices were at $3.30 a gallon, and a year ago prices were as low as $3.06 per gallon.

“The turmoil in the Middle East is also not helping,” Laskoski said. “Crude oil prices have skyrocketed over the past year causing further pain at the pump. I think drivers will continue to see an incremental increase in prices from now until about May or June, when prices are expected to plateau.”

Although prices have increased, Laskoski said Louisiana gasoline prices still remain well below the national average of $3.64 per gallon.